The assignment for this week's "Tuesdays with Dorie" was Raspberry Blancmanger, chosen by Susan of Sticky, Gooey, Creamy, Chewy. Thanks, Susan! I've read the phrase "quaking like a blancmanger" but never actually made or eaten one. It's very light and delicious! Check out Susan's blog if you want the recipe. 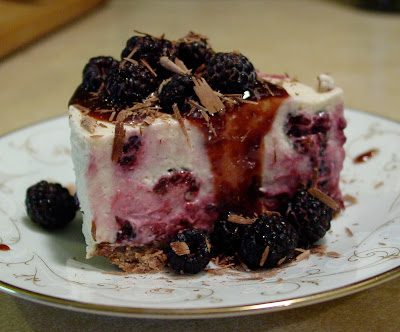 This was half the recipe, made in a 6-inch springform pan. I used purchased almond flour, which gave it a very smooth texture. For the bottom, I tried a variation of Dorie's Chocolate Pastry Crust, with more sugar and less cocoa. But it was a bit tough, I think I overbaked it. Still pretty good. I think a thin layer of sponge cake would be the very best bottom layer for this. The light texture would go better with the light, fluffy blancmanger. Or, crisp almond or chocolate cookies on the side...mmm.

The black raspberries are almost done for this year. We have a whole lot in the freezer and a few left for eating fresh.

See you all next week!
Posted by Bungalow Barbara at 10:32 PM 3 comments:

This week's project for Tuesdays with Dorie was a Brioche Plum Tart, chosen by Denise of Chez Us. Really it's more like a coffeecake, with a sweet bread dough bottom topped with jam and fruit. Check out Denise's blog for the recipe, or look on pages 54-55 of "Baking: From My Home to Yours."

I changed it up by using apricots, home-made black raspberry jam, and fresh black raspberries from our own garden. Unfortunately it was gone before I got around to taking a picture! So you'll have to visit some of the other TWD bakers to see what it looks like. Meanwhile, I'll tempt you with a closeup of our wild "blackcaps." 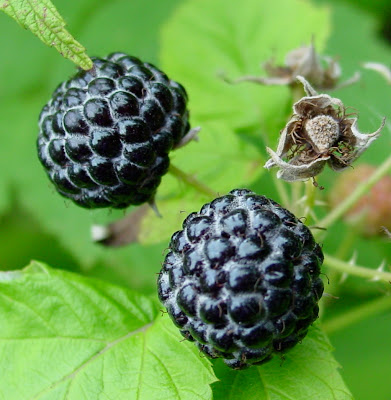 As I don't have a stand mixer, I made the brioche by hand. Here are my tips on doing this: mix flour and salt, place in bowl, and make a well in the center. Proof yeast and milk, and then mix with other wet ingredients, including melted butter. Pour into center of flour mixture, then mix with spoon or large spatula until it comes together.

Now for the tricky part -- this dough is way too moist and sticky to knead in the usual way. I started out with stirring, then found that it worked better to plunge my spatula under some of the dough and pull it up out of the bowl, stretching it as I went. Eventually that got tiring, so I oiled my hand very well and started pulling the dough by hand. I'd grab a bit and pull it up, leaving it attached to the rest of the dough so that the gluten got stretched.

Eventually the dough became very "lively" -- it would actively pull back into the bowl after I let go of it, sometimes moving around quite a bit before settling down again! I figured this meant the gluten was properly developed, so I went on with the rest of the recipe as written.

The only mistake I made was not to trust Dorie's baking instructions. After 20 minutes in a hot oven, the brioche dough was so brown around the edges that I got alarmed and turned the oven down. Bad idea. That just meant it took longer to bake, and the brioche dough ended up a bit on the dry side. It was still very yummy!

Next time I might add a little more butter to the dough. And I'd tent the tart with a ring of foil, so the center stays exposed and cooks better while the edge is protected. This would be good with all sorts of fruit!
Posted by Bungalow Barbara at 10:17 PM 8 comments:

Happy Fourth of July! Let's celebrate with an orange-flavored version of Dorie Greenspan's "Perfect Party Cake." This was the Tuesdays with Dorie assignment for June 30, chosen by Carol of mix, mix...stir, stir. You can find the recipe on her blog -- as well as lots of interesting recipes and information about spices. Oh, and be sure to read the tips from Dorie (and Nick Malgieri) as well! 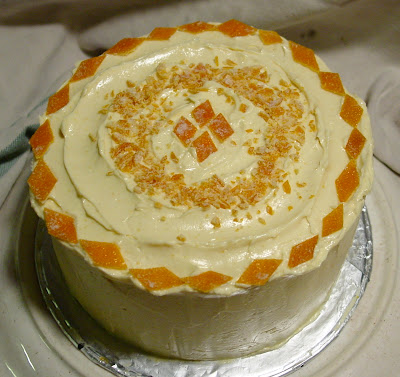 My choice of flavor was due to very practical considerations -- I had made a recipe of orange-flavored Italian meringue buttercream many months ago, and it was still sitting in the freezer needing to be used up! (The recipe was from The Cake Bible by Rose Levy Beranbaum. Sorry, it's not on the Web.) So, I went with orange-flavored cake, orange marmalade, and orange curd for the other cake components. (And home-made candied orange peel for the decorations.) 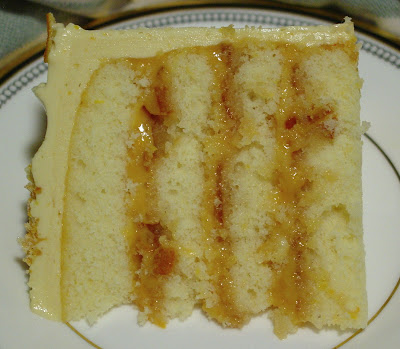 Cakes are still a "learning experience" for me but this one turned out quite well despite some problems along the way. 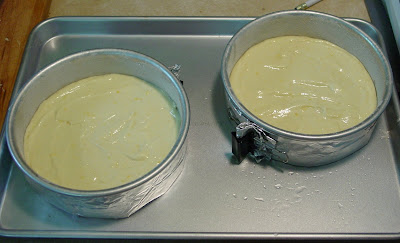 Here's the cake batter -- half of Dorie's recipe, in 6-inch pans. It seemed like a thin layer. I used orange zest and orange extract in place of lemon, and increased the amount to 1 1/2 times the original. I also reduced the sugar (by 2 Tablespoons for the half recipe) and added 1 Tablespoon of vegetable oil. Oh, and I weighed my flour, using that one cup of unsifted cake flour is 4.0 ounces.

Things I've learned about cakes along the way: use the right type of flour, and measure it the way the cookbook author does (best of all is if she gives weights--Dorie, please mention that to your publisher!). Have the butter soft, but not melted, and cream it with the sugar for a long time. Don't get impatient at this step! (I have to keep reminding myself of that.) Mix gently once you start adding liquid. And, pay attention to your oven temperature. Mine runs cool, so I always turn it up by 15 degrees. Then things bake just right.

In the picture above, see those foil strips around the cake pans? Those are my home-made "cake strips." They have wet paper towels inside. It slows down the baking of the outside edges of the cake, so it bakes more evenly. You can see them below, behind the cakes, opened up so they can dry out and be re-used. 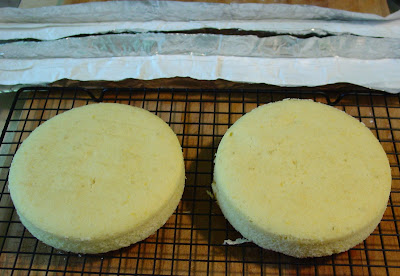 Here are the cakes on the cooling rack. They rose nicely, but didn't fill the pans all the way. They didn't brown at all, but the edges were pulling away from the pans and the top was springy, so I pulled them out. They were fine, moist and fluffy and just right.

Making the other components and assembling the cake turned out to be more of a job.

Well, the marmalade wasn't that hard. It was just a mixture of store-bought (Dundee's) and home-made. Next time I would either strain out the bits of peel, or puree it finely in the blender or food processor. I thought the bits of peel were a distraction to the suave texture of the cake, filling and frosting. And, I'd use an even thinner layer of marmalade -- the flavor was a bit too strong. Marmalade is very assertive!

The orange curd turned out to be a PITA. Partly that was my own fault. Instead of sticking with the recipe from Rose Levy Beranbaum that has worked for me before, I decided to get creative and adapt Cook's Illustrated filling from their Lemon Layer Cake. The recipe intrigued me because it had gelatin added, for extra thickness. I made half the recipe, substituting frozen orange juice concentrate (undiluted) for the lemon juice. The result? Very eggy, barely tasted of orange at all. I added some frozen orange zest, then some fresh orange zest. Still not orangey enough. Some strained marmalade. Still not enough, and now it was getting runny. Finally I added about 1 1/2 tablespoons of Grand Marnier, with more gelatin sprinkled over the top and dissolved. Ah, that did the trick! Let's hear it for Grand Marnier! But, now I had to chill it overnight--and it still was a bit runny. Sigh.

Finally I sliced the cakes and filled them. The orange curd was oozing out all over. More chilling, then gently scraping / smoothing the extra curd on the sides of the cake. Finally I could frost this beast!

It's amazing. Frozen and thawed Italian meringue buttercream looks like a nasty, curdled mess. But get it back to room temperature and beat the heck out of it, and it smooths right out! Put one coat on, chill (and watch the 4th of July fireworks), put the other coat on, decorate, eat!

The cake was delightful. The curd tasted good, but next time I'll start with Rose's recipe and add gelatin. (And maybe Grand Marnier.) The buttercream was not too sweet and tasted nicely of orange, not butter (it also had orange curd and Grand Marnier). But I find the texture of buttercream to be a bit too slippery for my taste.

I like frostings that are very light and fluffy, but not sweet. Whipped cream is ideal, except that it doesn't keep well. Cream cheese frostings are great (as long as they're not too sweet), but a bit heavy. Hmm. Do you suppose it would be possible to make an meringue-and-cream-cheese frosting instead of a buttercream? 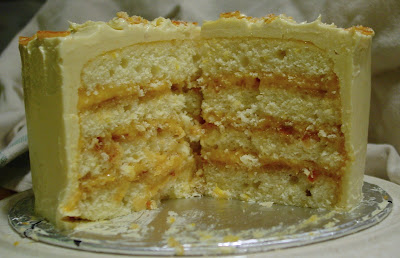 Thank you, Carol, for finally giving us the chance to make this cake for Tuesdays with Dorie! Be sure to check out all the other fabulous versions by the other TWD bakers.
Posted by Bungalow Barbara at 1:58 AM 18 comments: