More Tuesdays with Dorie catch-up. For the second anniversary of this wonderful blogging group, our founder Laurie let us vote for the recipe -- and then we got to bake one of the two top recipes. I went for the Tarte Tatin -- a French "upside-down tart" made with puff pastry (or other pastry) and apples. You can find the recipe here. 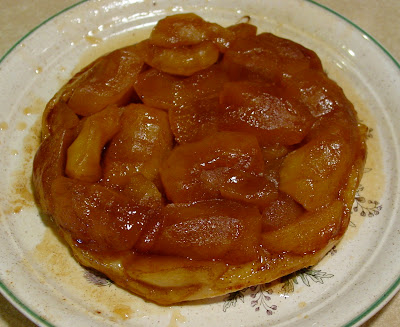 This isn't supposed to keep well, so making a smaller recipe sounded like a good idea. I found an oven-proof saucepan about 7 inches wide, cut up 5 apples (half the recipe would be 4 apples, but mine were small plus I figured I could just snack on any left-overs.) Started caramelizing the sugar/butter/apple mix -- got bored, walked away just a little too long -- returned to burnt caramel. Darn! I know better than that! Caramelizing always seems to take forever and then it goes really really quickly at the end.

Sigh. I tossed most of it -- there were a few unburnt apple pieces on top that could be saved. Putting some water in the pan and boiling it helped to loosen up the blackened remains of the caramel. OK, start over with a clean pan and more sugar, butter, apples -- fortunately I had plenty. This time I watched like a hawk and all was well.

I still had two 8-inch squares of left-over puff pastry in the deep freeze, from the Parisian Apple Tartlets back in June. I trimmed one to roughly round, put it on top and popped the whole thing in the oven. Easy peasy.

Turning it over onto the serving plate was messy. I had set the pan on a silicone mat to catch drips, and I also flipped the tart over the mat. Very good idea, as there was caramel spillage. Hey, apparently even the pros have this problem -- check out the picture in that article I linked to. See? I see caramel dripping down!

The apples did not stick to the pan and the result was delicious! Thanks to Dorie Greenspan, Laurie, and all the TWD gang for such good recipes and good times!
Posted by Bungalow Barbara at 10:19 PM 2 comments:

Email ThisBlogThis!Share to TwitterShare to FacebookShare to Pinterest
Labels: fruit, pies and tarts, TWD-Tuesdays with Dorie

Wow, has it really been more than a month since I last posted? Yikes!

I've been baking, just not posting. So, let's get caught up with my Tuesdays with Dorie baking. Here's what I did in December -- Dorie's Café Volcano Cookies and My Favorite Pecan Pie.

The "Café Volcano Cookies" were chosen for the TWD recipe of December 15, 2009, by MacDuff of Lonely Sidecar. They were a great way to use up some of the egg whites left over from the Sablés of the week before. 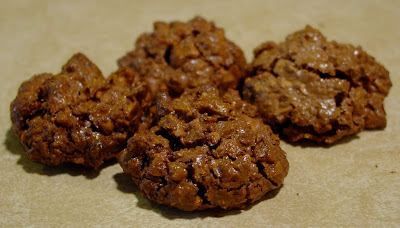 These were crunchy little things! I've heard this style of cookie called a "rocher" in French -- which translates as "rock" or "boulder." Well, they weren't that hard, but I can see where the name comes from. And in Italy there's a similar cookie called "Brutti ma Buoni" ("ugly but good") -- also apt. 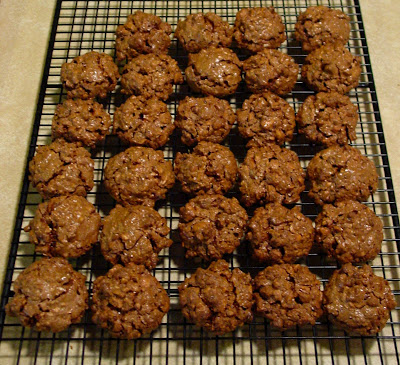 I added a little cocoa powder, but next time I'd leave that out. I think they'd be better just espresso-flavored. I liked them a lot. Jim didn't like them at all. Oh well.

On to the next recipe -- Dorie's "My Favorite Pecan Pie" was chosen for December 22, 2009, by Beth of Someone's in the Kitchen with Brina. This was a hit with both of us! The addition of espresso powder and chopped chocolate cuts the usual sweetness of pecan pie and makes it really good. I made a half-recipe in a half-size pie pan. 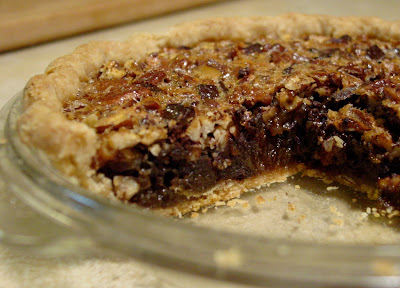 Next time, though, I think I'd cut the espresso and chocolate in half and add a few more pecans. We both thought it would have been better that way, at least for our tastes. But it was still really, really good. 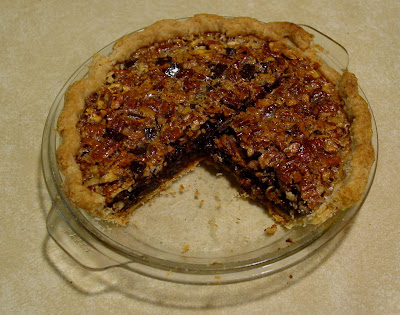 OK, on to catch-up for January! See you soon!
Posted by Bungalow Barbara at 4:16 PM 4 comments: