Hello everyone! I've missed blogging with you. It's great to be back.

What happened? Well, I blame it on Murphy's Law of Old House Renovation Projects. But I'll leave the details on that to the end of the post. First I want to get caught up on some of the Tuesdays with Dorie recipes that I made, but didn't post on time.

These are the Cottage Cheese Pufflets, chosen by Jacque of Daisy Lane Cakes. Aren't they cute? 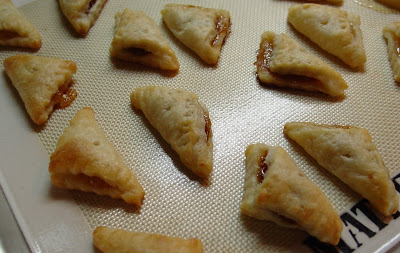 As many other folks reported in the Problems and Questions for this recipe, the dough was extremely moist and sticky. I ended up adding a lot of extra flour before chilling the dough, and more while rolling it out. (I like to use pastry flour when doing this, as it is less likely to toughen the dough.) This worked fine, and the results were not at all tough or dry. But next time, I will try draining some of the liquid from the cottage cheese before starting.

And the filling? I dove into the fridge and was startled by how many different open jars of jam we had! And only one had turned into a science project. (That one got tossed, of course.) So I made just a few pufflets with each filling. We had Dundee Orange Marmalade and Ginger Preserve, Rose's Key Lime Marmalade, Crofter's Apricot Conserve and Four Fruit Conserve, Smucker's Pineapple Preserve, and home-made greengage plum jam, blueberry conserve, tangelo marmalade and pink grapefruit marmalade.

Some of the pufflets are still in the freezer waiting to be baked up. Of the ones I did bake, the ginger and tangelo were my favorites. The pufflets were just a little underdone in the center despite being nice and brown on the outside. Still, the pastry was nicely flakey and tangy! Next time I will bake them a little longer. And Dorie is right, they don't keep worth a d***n. Eat 'em up fast, folks! 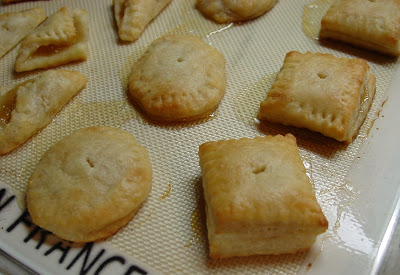 I also made the Espresso Cheesecake Brownies, chosen by Melissa of Life in a Peanut Shell. Sorry, I didn't take a picture before taking them into work, where they quickly disappeared! As other folks said in the Problems and Questions, I found the brownie batter rather stiff and the cheesecake batter rather runny. I added two tablespoons of sour cream to the brownie batter and it came out just fine. However, I overbaked them slightly and the cheesecake part developed deep cracks. We're talking Grand Canyon sized cracks here! The sour cream topping covered that up and also added a wonderful flavor note. I was thinking of omitting it and was glad I hadn't. But it was a bit runny for a dessert to bring into work. I think I'd substitute cream cheese for a portion of the sour cream next time.

I'm a fan of just plain brownies -- fudgy, with plenty of chocolate and some nuts and nothing else, please -- but these were good enough to give the plain brownies a run for their money!

And finally, here is the Creamiest Lime Cream Meringue Pie, as chosen by Linda of Tender Crumb. 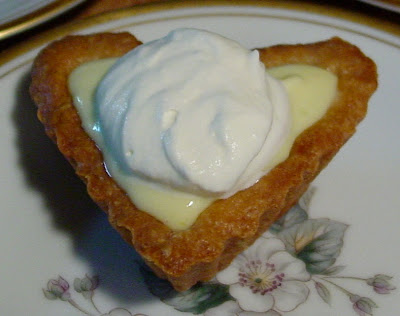 OK, it's a tart (with an almond pastry crust) and it's topped with whipped cream, not meringue. (Neither of us here at the bungalow like meringue.) I used less butter in the lime-ginger cream -- only one stick. (But it was Euro-style butter with extra butterfat.) I think I added a bit too much grated ginger to my cream -- it came out more like a ginger cream with hints of lime. But it was still fabulous!

I tried a recipe from Rose Levy Beranbaum's Pie and Pastry Bible for the crust. It tasted great but came out too firm. You couldn't cut it easily and even biting into it was a bit of a problem. I've had this problem with Dorie's recipe too. Since both of these ladies really know their stuff, I think the problem must be with me. I must be doing something wrong. Hm. More experimentation is called for.

Oh, and by the way, the Lime Cream freezes beautifully. So I have plenty left to fill my tart-crust experiments. I may even try blending some with gelatin-stiffened whipped cream to make a lime-ginger mousse.

So -- what kept me away from the blog? Well, my Mom was coming to visit at the end of September and of course that meant we needed to do a really thorough housecleaning. And clear all the stuff out of the guest bedroom, which I have been using for a "project storage" area for a long time. And finish off the renovation project of repainting the living room.

Oh my, Murphy's Law that "Anything that can go wrong, will" really got us on the last one. Jim started opening up the cracks in the plaster for repair. And the old paint (which had appeared reasonably solidly attached until then) started flaking off...and flaking off...and revealing not one, but two layers of chalky calcimine underneath...

The project got pared down to just the north wall and a portion of the west wall. It still took a long time.

Much, much later, after much scraping, washing, patching, and skim-coating, we finally were able to apply the paint. That went quickly enough...

And now we have put all the bookshelves back against the wall and you can't even see most of the paint! Sigh.

Oh, and my Mom's visit was great. We got the guest room, bathrooms and kitchen clean and she had no objection at all to eating out in the sunroom. (In fact, it gave her a better chance to birdwatch.) And we even managed to sit down on our new living room couch and watch a DVD together. (Hiyao Miyazake's "Kiki's Delivery Service." Love his animations.)

Last week's Caramel-Crunched Chocolate Tart is still in progress. I hope to post it soon and then we're on to the Split Level Puddings!
Posted by Bungalow Barbara at 1:15 AM 2 comments: