This is a late post for Tuesdays with Dorie. This week's project was the Peppermint Cream Puff Ring, chosen by Caroline of A Consuming Passion. (Hop on over to her blog for the recipe.) Thanks, Caroline! I've never made cream puff dough before and was looking forward to trying it.

Like many of us, I thought smaller individual cream puffs sounded more practical for a two-person family than one large ring. And I didn't have any mint and didn't feel like buying it. (We do have catnip growing in the garden, but no mint. The cats all voted in favor of catnip-flavored whipped cream, but they were overruled.)

The result -- mini cream puffs with orange-brandy flavored whipped cream and orange-flavored chocolate glaze. This was a half-recipe. I did have a few more puffs, but some of them broke apart as I filled them.

I had orange peel that had been steeping in brandy for a couple of months. I strained out about a quarter-cup of the peel and steeped it in 2/3 cup hot cream for about 30 minutes. (I was worried it would get too bitter if I steeped it longer.) The strained cream went into the fridge to cool.

I made a half-recipe of cream puff dough. I read the tips for cream puff pastry in Shirley Corriher's wonderful book "Cookwise." She recommends using bread flour. I didn't have any, but I did have some unbleached all-purpose flour that my husband often uses for bread baking. It's fairly high in gluten, so I used that. I took another tip from Shirley and substituted 2 egg whites for one of the eggs.

Here's the dough after cooking in the pan. 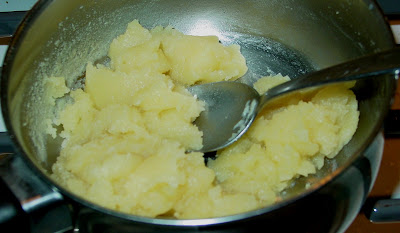 Here's the dough after beating in the egg. 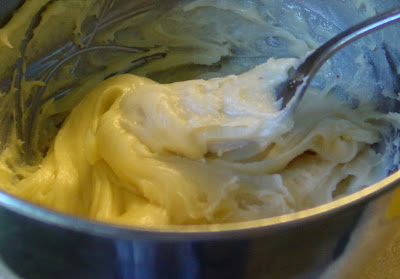 I was nervous -- how would I know when I'd beaten in enough egg? What if I did too much? It turned out it wasn't so hard to tell. The dough was thick and lumpy at first. I tried beating it by hand but that was way too much work. Out came the mixer. Much better. As I beat in dribbles of egg, it morphed suddenly into a nice, smooth, shiny dough that was still pretty thick. Aha! Success!

Following the suggestion of some of the other Dorie-nators, I piped it out using a plastic zip-lock bag with a corner cut off. Some of them were pretty funky looking. I smoothed them out with an oiled fingertip (worked great). 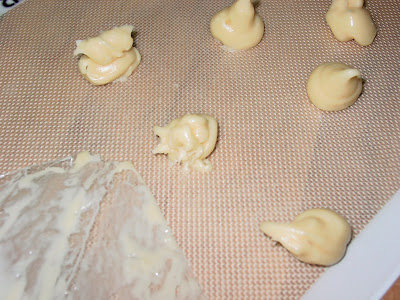 When I cut them open, they were quite dry inside. I guess it doesn't take long to cook these little guys.

Final filling and assembly was scheduled for the next day, but fate intervened. Our oldest cat fell ill and died (see previous post). We were not in a cream puff mood that day. But by the next day, the initial shock was starting to pass and we were ready for a sweet treat.

Wow! These were great! I'm going to have to make them again, and try different types and flavors of filling. Maybe I can recreate the ones I get every summer at the Dane County Fair. I think the filling is a mixture of pastry cream and whipped cream, flavored with vanilla.

Now I want to buy a piping bag!
Posted by Bungalow Barbara at 9:23 PM

So sorry about your cat :( I know how it is to lose a kitty.

Your flavor combos sound lush, well done! A word of advice on piping bags, I'd suggest buying a box of professional disposable plastic piping bags. I'm not big on the whole disposable thing, but if you're in the habit of using them often, as I am, it makes life easier. Especially when decorating cakes with different colored frostings.

I'd vote for orange brandy over catnip too. Great job!

Your flavour substitution sounds yummy. I like how versatile this recipe is.