This week's recipe for Tuesdays with Dorie was a Summer Fruit Galette, chosen by Michelle of Michelle in Colorado Springs. For the recipe, check out pages 366-367 of Dorie Greenspan's "Baking: From My Home to Yours," or hop on over to this page on Michelle's blog. 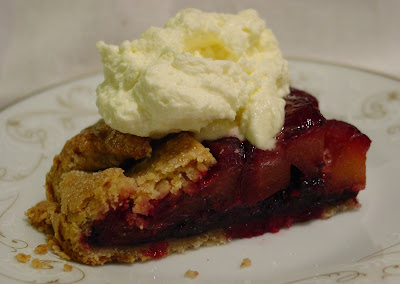 This recipe was a huge hit in our household. Jim said he thought it was the best Dorie recipe I'd made yet, and the best galette he'd ever had. And he is a real connoisseur of pies and tarts!

As I usually do, I substituted 1/3 of the total amount of flour with whole wheat flour instead. We both like whole wheat, but a crust made with all whole wheat isn't quite as flaky and the texture is too coarse and crumbly. We like this ratio as a compromise. The dough came together very nicely. As I noted before for the TWD Blueberry Pie, the big secret to good pie crust is keeping it cold all the time. The weather's been hot (for Wisconsin, that is, which means well into the 80s) so I froze both the butter and shortening. I decided to try a technique from a Cooks' Illustrated recipe for rustic tarts and did a quick "fraisage" of the dough. It's supposed to help keep the crust from cracking and leaking, and it did seem to work. I then let the dough chill overnight.

I decided to make two smaller galettes. Being mathematically inclined, I figured out that if you want to make 2 galettes from the same amount of dough, you should divide the diameter of the dough by the square root of 2. (For 3 little galettes, divide by the square root of 3, for 4, by the square root of 4, and so on.) That meant I should roll out two pieces of dough about 9 1/4 inches in diameter, and put the filling on a circle about 6 1/4 inches in diameter. I found two pot lids of the appropriate dimensions and rolled away. I was in a "neat and tidy" mood so I trimmed the edges neatly, although you don't really need to do this with a galette. They're supposed to be rustic. 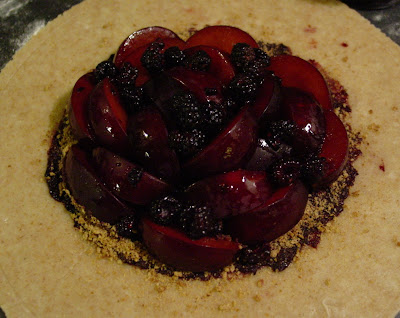 For jam, I used homemade black raspberry jam -- the last jar of a batch from two years ago that needed to be used up. Graham crackers for crumbs. For the fruit, I sliced up 7 plums (that was all we had) and then added in about 2/3 cup of fresh black raspberries (the last picking from our garden). I drizzled 1 tablespoon of vino cotto over the fruit and let it sit for 15 minutes, then drained the fruit and arranged it on the crust. I had great fun carefully making a ring of plum slices around the edge of the galette, filling the inside with a thin layer of raspberries, then arranging more plum slices and tucking in more raspberries in the spaces. There was a little too much fruit, but fortunately I had saved the dough trimmings, so I made a teensy extra galette with those.

The dough was getting soft quickly in the heat, so I froze the galettes for about 20 minutes. That firmed up the dough nicely. Brush with water, sprinkle with sugar, and into the oven they go! After about 25 minutes I poured in the custard. I fiddled with that a little, adding in the drained vino cotto and fruit juices, plus a tablespoon of sour cream, plus a few drops of almond extract. I'd been careful to not to pack the fruit too firmly, so there was there was room for most of the custard in the two bigger galettes and one mini galette.

Fifteen minutes later they were out of the oven and cooling. There was just a little bit of leakage over the top of one crust, not very much. We could hardly wait!

Served with whipped cream (which I overbeat, but fortunately I was able to stop just before it turned into butter). I think Dorie is right, though, this galette would be fine all by itself. 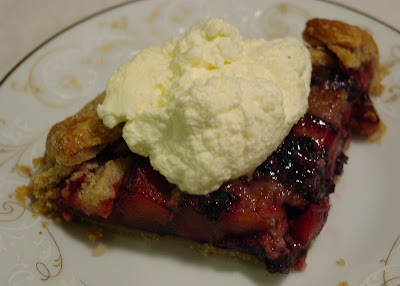 The crust is superb! As well it might be, considering the sheer amount of butter and shortening it contains. This is not an everyday pie crust, this is a full-speed-ahead, d**n-the-calories-and-cholesterol, absolutely delicious and decadent pie crust!

The fruit was wonderful, the jam and graham cracker crumbs protected the lower crust from getting soggy, and the custard added just the right note of sweetness and flavor. Wow, what a recipe!

By the way, vino cotto is an Italian-style cooked-down wine syrup. I made it for the first time about a month ago and plan to keep it on hand all the time! It is a wonderful sauce and flavoring for fruit desserts. A little bit goes a long way. See the bottom of my July 4th-Cherry Tartlet post for the recipe.
Posted by Bungalow Barbara at 11:26 PM

your galette is beautiful :) Great job

This looks great! I love the plum-raspberry combination. I saw when you commented on my post that your parents live in Clemson- that's where we are! My husband and I both went to Clemson and we're still in the area and love it!

Mmmmm raspberries and plums. what a yummy combination. My husband agrees with yours, one of his favorite Dorie recipes! Great job!
Clara @ iheartfood4thought

wow, your galettes are indeed neat and tidy! mine was extremely rustic, haha. :) looks absolutely delicious.

I love the way your galettes turned out. YOur fruit combination is wonderful. Your husband is a lucky man!

I added you to my blog list..I need to keep track on everyone!

Heh, you and our Engineer Baker should get together... I love your mathematical approach.

And I believe the "best Dorie to date" says it all. Great job!

I love plums and raspberries, and they sound great together. I also love that CI recipe--the all-butter crust that I mentioned in my post is that one. And I didn't mention it in my post, but I did the fraisage, too. It helped some, but I still found this dough to be a bit too fragile for a free-form galette.

Those are gorgeous! I love the fruit combination. I totally have to make this again.

Your galettes came out so beautiful! I definitely want to trim the edges next time, I think it pays off. Plums and raspberries are great together and I love the addition of vino cotto - sounds yummy. I can't wait to make this one again, myself. Now onto chocolate & bananas!

Your galettes came out wonderful! I must try the fraisage next time.

Your wine syrup sounds incredible (especially with the fruit galette). I can't wait to give it a try. Your galettes look wonderful!