After a busy week, I'm finally getting around to showing you the Tartest Lemon Tart and Tartlets for "Tuesdays with Dorie." Many thanks to Barb of Babette Feasts for choosing this recipe! 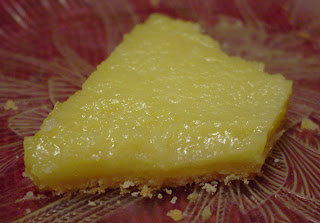 I love lemon. I love lemon tarts -- one of my favorites is a Shaker Lemon Tart, which uses whole lemons thinly sliced. So when I saw the Tartest Lemon Tart (made with whole lemons) in "Baking: From My Home to Yours," I knew I'd have to try it. In fact, I was planning to make it even if it wasn't chosen for Tuesdays with Dorie. There was already a container of pureed Meyer lemons and sugar in the freezer, just waiting for the right moment... 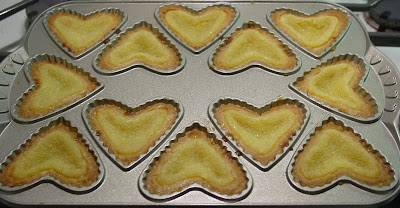 And then, the heart tartlet pan showed up at T. J. Maxx -- half price. Score!

I made one recipe of Dorie's Tart Dough with almonds, divided it into 12 equal pieces, and chilled them. Then I rolled each one out into a sort of triangular shape and fitted it into the heart molds. (I tried patting the first one into the pan with my fingers, but it came out so lumpy and uneven! Rolling makes for a much more even thickness -- for me, at least.) Then I froze the dough overnight.

Into the oven for pre-baking at 375 degrees F. "Oh, these are so small, I bet I don't have to line them with foil or weight them," I thought. Yeah, right, famous last words! Peeking into the oven a few minutes later, I saw the tart shells slithering down the sides into pools of butter at the bottom. Argh! But I thought fast and managed to rescue them. When the dough was just barely beginning to set, I pushed it back up the sides of the pans with the back of a spoon. It was soft enough to squish around a bit, but just firm enough to stay in place. A little shrunken, but not too bad. And the butter pools miraculously got absorbed as they baked. Phew!

Note to self: next time, try preheating the oven to 425 degrees for a blast of heat to set the dough faster. And definitely line and weight the tartlets. That's going to be a pain. Sigh. Maybe the pan wasn't such a bargain after all.

OK, now for the filling. Most Meyer lemons have thin skins, but the ones I bought were unusually thick-skinned, so I had removed the yellow zest and discarded the white pith. I had used two of them (they're small, and besides, I love lemon) and reduced the sugar to 1 cup (they're less sour than regular lemons, and besides, I love lemon). Also added 1/4 teaspoon of salt, partly because I always add a little salt to sweet things, and partly because salt is good for reducing the perception of bitter flavors. And I had to make a quick last-minute substitution when I discovered we only had 1/3 cup of heavy cream left. I added enough sour cream to bring it up to 1/2 cup, and all was well.

I swear to you, I filled those little tarts right up to the very top of the crust! See how much they sank in the middle? But they didn't overflow -- puffed up nicely while baking, but didn't overflow. They only took about 25 minutes to cook.

And for a final problem -- once we tasted them, we agreed the ratio of filling to crust was way off. Way way off. Almost all you could taste was crust. Granted, the crust is utterly delicious, but we wanted to taste more of the filling, which is also utterly delicious.

As I had a lot of filling left over, I made some more tart crust and made this long rectangular tart as well. Next time I'm just going to make a round or rectangular tart. And there will be a next time -- because I love lemon! 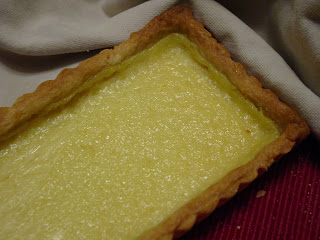 Posted by Bungalow Barbara at 11:37 PM

Email ThisBlogThis!Share to TwitterShare to FacebookShare to Pinterest
Labels: pies and tarts, TWD-Tuesdays with Dorie

That is the cutest heart tart pan ever..I am off to TJ Maxx to copy you!

Better late than never, as they say... on top of it you late mini pies come in a beautiful heart shape! ...how could anyone have a problem with that!!! LOL Lovely!

Love the mini-heart tarts and love lemon even more! The tarts look delicious!

oh, barbara, i just adore those little heart tartlets. what lemony goodness! and i love meyer lemons too!

These are too cute! I love lemon too, and I missed this recipe. I think I'm going to have to find a cute pan like this and do a rewind!

The tarts sound delicious. And the pan -- so cute! I just scored a large heart-shaped pan (kind of the size of a pizza pan) at a garage sale for a couple dollars and I'm dying to use it :)

Adorable heart pan. Did they come out easily??? Look just right for a portion. Looks lovely.

I'm with you, I love lemon and I really love this tart! Your heart shaped tarts are so cute!

these would be the cutest valentine's gift :) great job!
erin@ glutenfreewithapurpose