This week's project for the Tuesdays with Dorie group was a Cherry-Fudge Brownie Torte, chosen by April of Short + Rose. Check out her blog for the recipe, or see another version on Epicurious. 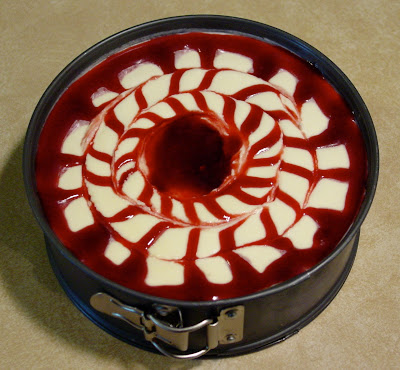 I love chocolate, cherries, and mascarpone, so I was really looking forward to this recipe. But frugality suggested a half-recipe. Some of the folks in the Problems and Questions forum said a 6-inch springform was a little small for a half-recipe, so I went for a 7-inch springform instead. That was perfect.

Here's my favorite brand of dried tart cherries, from Door County, Wisconsin (famous for cherries). And here's a link to their Web site -- they do mail order, folks! 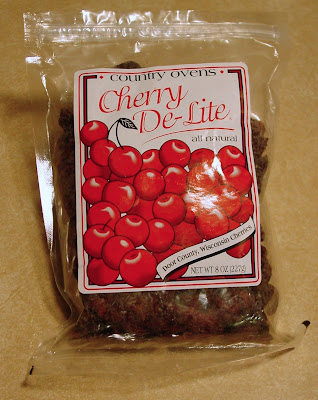 I made half the recipe for the brownie portion, but 2/3 of the recipe for the mascarpone mousse topping, because I had an 8-ounce container of mascarpone and didn't want to have 2 ounces left over. And topped it with home-made cherry jelly, piped in spokes and then swirled around in circles. All seemed well. Doesn't that torte up above look wonderful? It's been chilled overnight.

Here's what happened when I unmolded it, though. 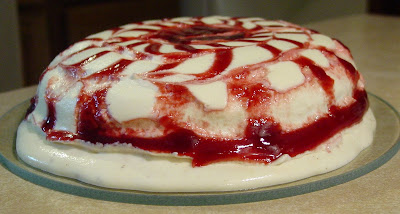 It's a mousse landslide! Looks like a steep hillside after a heavy rain...

I think perhaps it was because I had frozen and thawed the mascarpone. At least, that's my current theory. 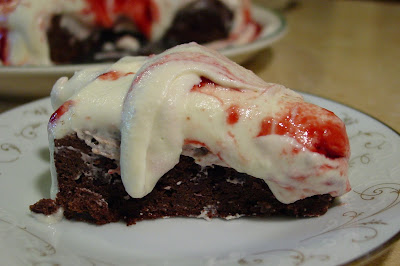 But it tasted good anyway. Although we thought the brownie base was a bit too dense and hard when chilled. It would be better at room temperature or even warm, perhaps topped with a scoop of cherry vanilla ice cream.

And the mousse was a little bland. I'd have liked some cherries in there, too. And some unflavored gelatin to thicken it up! I have another 8-ounce container of mascarpone in the freezer. Maybe it will end up in a slightly different Black Forest Torte some day...
Posted by Bungalow Barbara at 7:32 PM

Beautiful decorating job! It must have been delicious with the cherry jam on top.

Your decorating is beautiful! Too bad the mousse didn't stay put. I thought the brownie was good after sitting on the counter for about half an hour.

Your decorating job is the best I have seen so far...

That's exactly what I did when I saw the photo of your lovely brownie torte. What a stunning photo!

I really love how you decorated the torte, and I'm sure it tasted delicious as well. My mousse was fairly solid even though I expected it to be more runny.

I love your brownie torte! The cherry jam spokes on the mousse look fabulous! It's too bad it fell down, but I kind of like how you get mousse all over the torte that way! =)

Oh It looked so Christmas'y with its red and white, and then I scrolled down and watched it go dowwwwwn. I felt so bad for it. Ill bet it tasted divine. I hope you can make it again. joan