One of the choices for November's "Tuesdays with Dorie" was the Chocolate Caramel Chestnut Cake, chosen for November 3 by Katya of Second Dinner. It's a fancy cake, with layers of cake made with chestnut spread, moistened with a brandy syrup, filled with caramel-milk chocolate ganache and chopped chestnuts, frosted with more ganache. And as if that's not enough, then you glaze it with a darker ganache and top it with gilded chestnuts. Yikes! You can find the recipe on Katya's blog or on Epicurious. 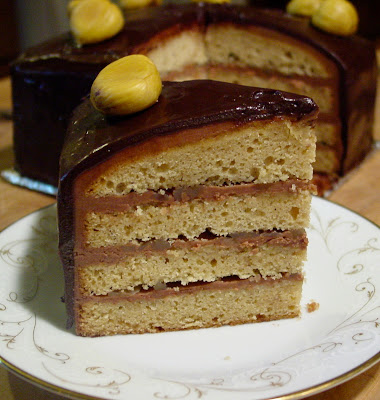 This is a half-recipe, made in a 6-inch square pan. Looks fabulous, doesn't it? I really liked how it tasted, too. It was a great Thanksgiving dessert.

I'm going to blather on at great length about this cake, so here's a quick summary:

1) This was the first time I cooked with chestnuts -- or ate them. I think they're kind of bland and boring now that I've tried them. But it was worth a try! (Oh, and I didn't gild them.)

2) Despite my opinion of chestnuts, I loved the cake!

3) Instead of Dorie's glaze, I used the Chocolate Lacquer Glaze from "Rose's Heavenly Cakes." Shiny!

One reason I wanted to make this cake was the sheer challenge of the recipe. Another was that it gave me an excuse to try chestnuts. I've never had them. After tasting both canned chestnuts and fresh, home-roasted chestnuts, I'm sorry to say that my opinion is "meh." They're not like other nuts -- more starchy, softer, less "nutty," with a mild, earthy taste that I don't dislike, but don't go crazy for either.

And as my husband pointed out, "They look weird. Like little brains." Oh, thanks for that image, love!

On one of my shopping trips to "the big city" (Madison, WI), I looked around for chestnuts. No fresh chestnuts at that time (they've arrived now, though). No sweetened chestnut spread (and I visited quite a few stores). I did find canned chestnuts at Whole Foods and sprang for a 10-ounce jar.

Having tasted them and found them bland, I decided to see if I could dress them up with a caramel glaze. 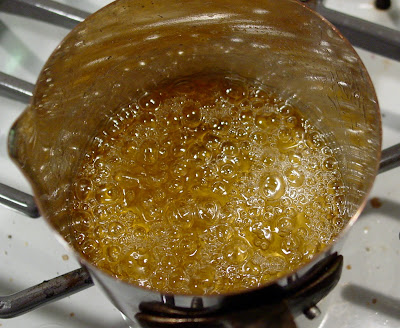 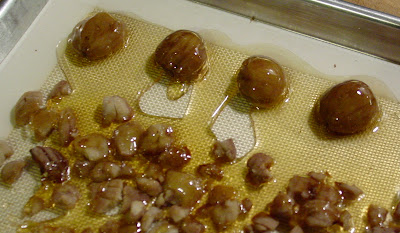 It looked like it was going to work, but a problem soon developed. Despite draining and drying the canned chestnuts, they still were so moist that the caramel wouldn't stick. And after a overnight stay in the refrigerator, the hard caramel glaze had turned into runny (but delicious) caramel syrup.

Since I couldn't find the chestnut spread, I made my own. Note to self: if I do this again, do NOT put the chestnuts into caramel syrup first. It made for a sticky mess that refused to turn into a paste, even after trips through my mini-food processor and blender. Eventually I had to push it through a sieve. It did taste lovely, though, after the addition of vanilla extract and enough water to make it spread-able. So far this is my favorite way to eat chestnuts. It's lovely on toast made from Jim's home-made bread!

Here's the cake - the chestnut spread gives it a nice color. 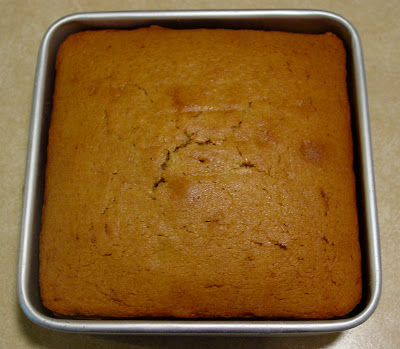 Sorry, no pictures of making the caramel-milk chocolate ganache filling. I'm not usually a fan of milk chocolate, but this ganache was luscious. 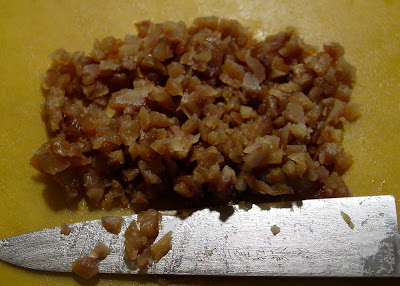 Here's the cake after filling and frosting with the ganache. Then it went into the refrigerator overnight. 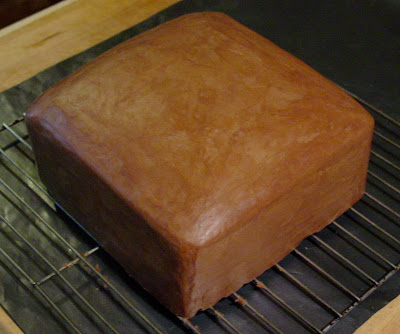 At this point I departed from Dorie's recipe and made the super-shiny Chocolate Lacquer Glaze from Rose Levy Beranbaum's new book, "Rose's Heavenly Cakes." It's easy to make, but alas, it thickened up quickly when I poured it on the cold cake. The recipe called for bringing it to 85 degrees before pouring, and I did, but for a really cold cake like this one, I think you need a higher temperature. Still, it looks pretty good. If you want to see what it should look like, check out this post by Rachel of the Heavenly Cake Bakers. Now, that's shiny!

Unfortunately, my whole chestnuts had been sitting in the refrigerator for two weeks, and I'd made the mistake of not storing them in the caramel syrup. They turned into a science experiment. Oops! By that time, fresh chestnuts were coming into the stores -- so I bought a few and roasted them in the microwave. Those are the ones on top of the cake. Sorry, fresh-roasted chestnuts still are "meh" as far as I am concerned. But it was fun to try it out! 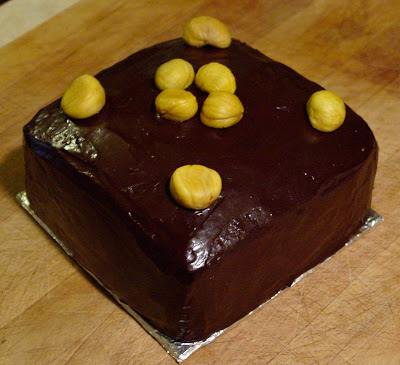 After all these lukewarm statements about chestnuts, you'll probably be surprised to hear that I really liked the cake. The flavors were all subtle and blended well together, and it was so elegant! I do wonder how it would turn out with hazelnuts...bet I'd like it even better.
Posted by Bungalow Barbara at 4:33 PM

I had to laugh, Barbara, because I have always felt guilty for not sharing the delight of chestnut lovers as they wax enthusiastic. The whole ceremony - the man roasting them on the street corner in new York and in Zurich where I saw them many times in the winter, and the scent of them with the burning wood is heaven - and then the vendor wraps them in their little paper, and you take your first bite, hot, fragrant, and then - as you say, "Weh!" No difference to me where I was, I didn't like the texture or the taste. Chestnut spread is a different matter for me. At any rate, your cake looks wonderful!!!!!!!!!!!!!! I know it must have been delicious. joan

Gorgeous! My gosh you're a brave woman to make this for Thanksgiving. Wish I was at your house for dessert!

Hi Sunshine!!! I just sent you a long note via FaceBook. You can also find me over at goodbookoftheday.com.

Beautiful job on the cake, Barbara! I felt like I had a lot to say about this one too; it was a lot of work, but fun.

Your cake looks lovely, Barbara. I thought I had enough baking pans, but now I'm coveting your 6" square. =)

Love your square pan also. Your post pic is gorgeous. I might need that icing recipe. Have you ever posted it?

Your cake is beautiful. The sliced cake picture is perfect. This was such a wonderful, rich dessert.

Did you hire a photographer to take the first photo on this post??? It's stunning!

I love the multiple layers of your cake Barbara. The lacquer glaze is the perfect visual compliment as well. Sure wish I could have sampled a bite.

PS - the best chestnuts ever are the ones you purchase freshly roasted on the street of NYC.

I like chestnuts roasted over the fire pretty well, but mostly I agree with your assessment. But they are great IN things, imo. Your cake is stunning, and I like how your two chocolates really contrast in color. The difference wasn't as apparent in mine. Great job! (and let me be the first to thank you for your wonderful - and easy! - TWD choice.)

I have NEVER tried chestnuts, much less baked with them. I think it is awesome y'all tackled this recipe. Amazing.