Hello folks, I'm finally getting around to posting about the Heavenly Cake Bakers' choice for last week -- English Gingerbread Cake. 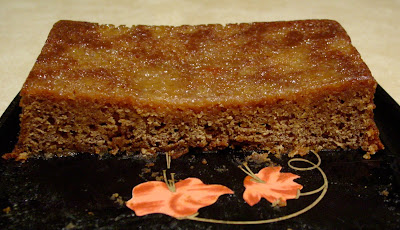 For this group, we don't post the recipes, but you can find it in "Rose's Heavenly Cakes."

The recipe calls for Lyle's Golden Syrup or light corn syrup. Lots of it (1 1/4 cups). I had both in the cupboard, but even after scraping out both containers, I wasn't quite up to the full measure. So I added about 3 tablespoons of molasses, and used white sugar instead of brown sugar. I also had a feeling that this cake would not be gingery enough for me (only 1 teaspoon of ground ginger), so I added about 1/2 teaspoon grated fresh ginger and 1.5 ounces (1/3 cup) minced candied ginger.

The cake batter seemed very bubbly when I put it into the pan. It rose a lot, then fell in the middle. I think it was overleavened. I'm quite sure I measured the leavening correctly -- and I didn't mix them up either -- so I wonder if perhaps the culprit was the extra molasses. It might have added extra acidity and caused more of a reaction with the baking soda. Just a thought. 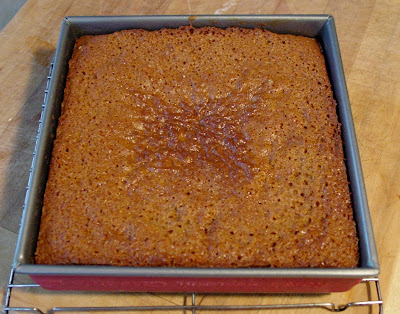 Because of the fallen center, I decided to turn the cake upside down for serving. Here it is, brushed with the lemon syrup. 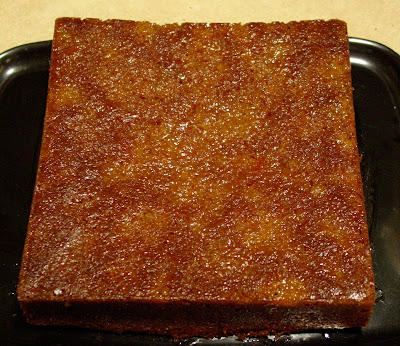 And the verdict? Wonderful texture, except in the very center -- light yet moist. Great flavor, but even with the extra ginger, it wasn't quite gingery enough. The lemon syrup added a wonderful note.

Next time? Oh yes, there will be a next time. I think I will use a few tablespoons of molasses again -- I liked the flavor. But I will reduce the baking soda a bit. And definitely add more ginger -- about 1 1/2 teaspoons dried, 1/2 to 1 teaspoon fresh, and 2 ounces candied. No subtle gingerbread in this house!

This was wonderful just plain. But I've been wanting to try a cream-cheese sauce ever since I read this passage in Robin McKinley's "Sunshine" --

"I'd made my special cream-cheese sauce to go with the triple-ginger gingerbread. I'd long felt that gingerbread, while excellent in itself, was still essentially an excuse to eat the sauce, so I'd always made twice as much per portion as the original recipe called for. Then it turned out that some of our customers were even more crazed than I was, so I started making three times as much, and we served it in little sauceboats. You got purists occasionally that didn't want any sauce, but the slack was taken up somehow."
Doesn't that sound good? Anybody have a good recipe for cream-cheese sauce?

About the book "Sunshine" -- if you like vampire stories with scary, sexy vampires, lots of dark humor and irony, and a heroine who seems to be called to deal with the vampires but really just wants to get on with her everyday life (being a baker) -- then you'll like this book. And if you like to bake, you'll covet her recipes. I keep wondering -- what are Lemon Lust, Butter Bombs, Bitter Chocolate Death, or Hell's Angelfood?

Oh hey, Robin McKinley has a recipe section on her blog -- I'll have to go over and take a look!
Posted by Bungalow Barbara at 8:15 PM

How did I miss that quote about cream cheese gingerbread sauce in Sunshine? Following your pointer, I found this cream-cheese topping for gingerbread on McKinley's recipe pages, though it doesn't look to be very sauce-like. Still, I think it deserves a try...

Gorgeous! I love the half-full pan pic at the top - I guess this means the rest was quickly consumed.

I already made this a second time and also used some molasses in addition to the light corn syrup. It did add a nice flavor. I got the same non-baked yet thing in the middle. Thanks for the pointer. I think that next time I might try dark corn syrup instead of light and leave out the molasses.

I also got a better crumb by using Wondra flour the second time, as I can see that you got the same kind of crumb as my first cake. I still had to pop some flour balls though with the Wondra, so it might just have to do with integrating the flour properly.

I need to reread Sunshine, I'd forgotten how good some of those recipes sounded. :)

I'm not sure why any author would go to the trouble of creating an entire fictional universe in which everyone subsists on a diet that seems medieval, it's more fun when the world they craft is abundant enough to make room for things like cinnamon rolls and Chinese food.