Though I'm no longer a member of the Heavenly Cake Bakers group, I still bake along from time to time. This week's choice was the Swedish Pear and Almond Cream Cake, from pages 58-60 of "Rose's Heavenly Cakes." 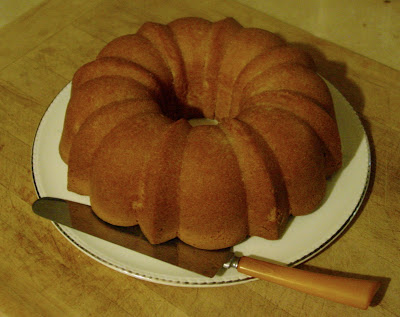 It looks like a plain Bundt cake on the outside..... 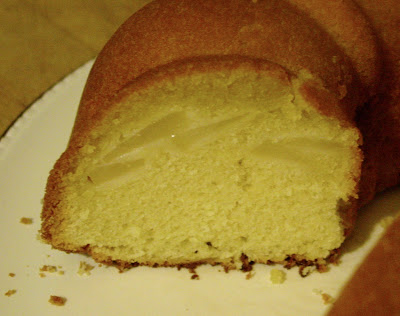 ...but inside you find a layer of almond cream (it's that darker, moister-looking area at the top) with tender thin slices of pear.

The cake is Rose's favorite yellow sour-cream butter cake, almost exactly as on her blog (see this link), except it uses 1 whole egg and 2 egg yolks instead of 4 egg yolks. I didn't have quite enough sour cream (Jim used it in his traditional Sunday waffle), so I made up the remainder with a mixture of yogurt and heavy cream. It seemed to work just fine.

All was going well until I turned on the oven light at 40 minutes into baking to see how it was doing. Without realizing it, when I turned off the light, I also turned off the oven! At 60 minutes it should have been done, but wasn't even close. That's when I realized my mistake. By that time the oven had cooled down to about 275 degrees. Oh rats! I turned the oven back on to 350 F and gave it another 10 minutes, and it was done. The top was too dark, but heck, that ends up on the bottom anyway when you serve the cake. And the cake part was just a touch overbaked and dry -- but by the next day, the moisture from the pears had taken care of that problem as well. You gotta love a cake that forgives your mistakes!

"This is a 'tea cake,'" said Jim. I agree -- it's the sort of simple and delicious cake that cries out to be part of your "afternoon tea." If you don't have afternoon tea (we usually don't), then it's wonderful any time at all.
Posted by Bungalow Barbara at 8:17 PM

despite having varying oven temperatures, your cake looks perfect! i was scrolling through your blog and fell in love with your kitties all over again.