I've been baking this week! First I made the Russian Grandmothers' Apple Pie-Cake for the Apple Treat day at work, and then I tried adapting last week's Dimply Plum Cake recipe to see if I could solve the "dryness" problem.

But first, thanks to Mari from Mevrouw Cupcake for choosing Crême Brulée for this week's recipe for Tuesdays with Dorie. Great choice, Mari, and after reading some of the reviews, I see I'm going to have to try it! And thanks to our leader Laurie for allowing us to opt for a rewind instead. I don't have a torch (kitchen or shop type), didn't want to buy one just now, and was nervous about the broiler method. 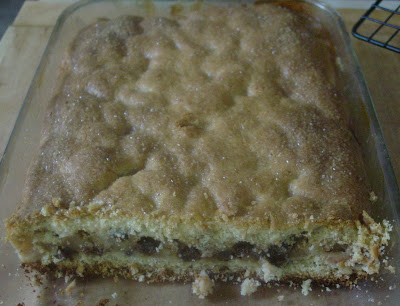 First, the Russian Grandmothers' Apple Pie-Cake, first chosen by Natalie of Burned Bits for the week of March 11, 2008. I made this recipe pretty much as written. I used 11 apples of varying sizes and 1 bruised pear that had to be used up, and cut them into chunks. This gave me about 9 cups of apple/pear pieces. You definitely don't want much more than that, because they wouldn't fit into the pan! I did add the zest of one small lemon to the "crust," but I couldn't taste it. Next time I'd leave it out or add it to the apples instead. I added a bit of salt to the apple filling -- I think it brings out the flavor of the fruit. And the top of the crust got a nice sprinkle of Demerara sugar.

This isn't exactly like a pie or a cake. In fact I think it's most like a double-crust cobbler. Whatever it is, it's good! I made it late in the evening, and we both had some for breakfast. Jim said it wasn't bad, but he thought he'd prefer a pie. I wrapped the rest up and took into work for our Apple Treat Day. When I came back with nothing left but crumbs, he complained that I hadn't saved any more for him. My reply, "I thought you didn't like it that much!" Ah, the difficulties of spousal communication...

I wish I had taken my camera to work -- we had a lovely array of apple treats spread out along the window ledge. Most of them were very good, but too sweet for my taste, which runs decidedly to the "less sweet" side. I did enjoy a version of "Teddie's Apple Cake" from the New York Times (recipe here). Here are some comments from my co-worker Livija, who made it: "The thing that originally attracted me to Teddie's Cake is that there is no butter…only oil. Usually those recipes are very forgiving. I used 1c flour, 1 1/2 c whole wheat flour and 1/2c flaxseed meal for the 3c flour part. Also, used 1c white and 1c brown sugar for the 2c sugar part. Made it again this weekend and substituted apple sauce for part of the oil, also, and it was still delicious!"

Apple Treat day was on Wednesday, so by Sunday I was "aching to bake" again. After reading lots of posts about the Dimply Plum Cake, and thinking about what I didn't like about mine, it was time to fiddle with the recipe a bit. Here's what I did: 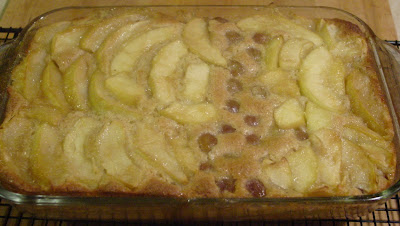 For the cake, my major change was to add some sour cream for moisture and tenderness. I had just about 6 tablespoons left in an open container, so that's what I used. I cut the sugar down to 10 tablespoons and increased the cardamom to a rounded 1/4 teaspoon because we both like it! I mixed the batter exactly the same, up to the point where you add the dry ingredients. At that point I added half the dry ingredients, mixed briefly, added the sour cream, mixed briefly, and then finished with the remaining dry ingredients. (Standard procedure for a butter cake.) This time I went for a 7 by 11 inch Pyrex pan, to spread the batter out a little more.

The batter was not quite so thick in consistency, but the fruit didn't sink deep into it, so that was good. As the plums were mostly gone, I dove into the refrigerator and came up with some seedless red grapes (not enough for the whole cake) and a couple of large Ginger Gold apples. OK, the grapes go on one half of the cake. The apples were sliced (without peeling, as I thought the peels were rather pretty), and briefly cooked with a little butter and a spoonful of apple juice. Unfortunately, they turned out to be the kind of apples that begin to fall apart when cooked. Yikes, pull 'em off the heat! They were layered nicely on top of the other half of the cake. The extra apple bits got put on here and there, covering up some of the grapes. I finished with a good sprinkle of Demerara sugar, and into the oven it went.

To start with I had the oven temperature between 350 and 325. After 20 minutes I rotated the cake. Gosh, lots of juice coming out of the apples! I got nervous and turned the oven back up to 350. The edges were getting brown by 40 minutes in, but center was clearly not done. After 50 minutes, the center looked better and the edges were getting mighty brown. Time to stop. I let it cook completely in the pan, not unmolding it at all.

Verdict:
an hour after baking -- moist and delicious! The crumb is wonderful. This is much better!
Next morning: the cake near the fruit is beginning to get soggy. Still good, but I see why Dorie went for a rather "dry" cake recipe to start with. I guess I overcompensated for the "dry cake" part. 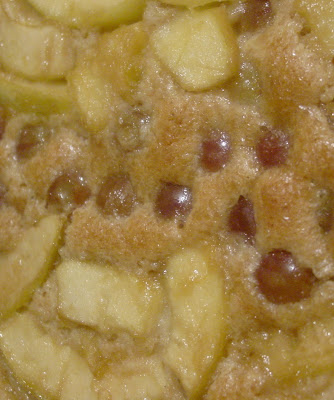 This recipe is beginning to look like a keeper. What I'd do differently next time:
1) use an even bigger pan, probably a 9x9 square one. I think this cake is best with a thinner layer of cake and lots of fruit.
2) use sour cream, Greek yogurt, or drained yogurt, but reduce it just a bit to 4 tablespoons. Or perhaps use 1/3 cup of sour cream and leave out the oil altogether?
3) use lots of fruit, but let a little bit of cake show in between pieces.
4) possibly reduce the sugar a bit more, to about 8 tablespoons.
5) be brave and bake at 325 the whole time.
Posted by Bungalow Barbara at 11:29 PM

Not being a big lover of apples or baked apple desserts, I was pleasantly surprised that I really liked the Russian Grandmother's Apple Pie-Cake

I loved this cake too, but I love more crème brûlée.

Well you certainly did a lot of baking ! I didn't try the gm apple cake when I will I'll keep in mind your suggestions ! I would love to work in an office like yours ! ciao !

I should really make the apple pie-cake again. We really enjoyed it when I made it back in March. Thanks for the reminder. =) And I love hearing about how you tweaked last week's cake recipe. I'm still working on that one myself.

I started TWD the first week in April so I missed this one. I have been curious, though. Thanks for the post! I am going to try it this fall.

Your rewind is divine! I am not a fan of baked fruit. But this looks yummy!!

Oh, the apple pie-cake looks delicious! I'll have to try a rewind on that, too. Mmmmm.

Oh this looks great, and I have a ton of apples I'm trying to use up right now...I may have to give this one a try.

Your apple-pie cake looks good. I'll have to try it since I joined after the fact. Glad your dimple plum cake redo came out better!

I just made this last week as a pie. I was calling it apple pie/cake/cookie because it was a bit of each but overall so good!

They both sound so good! Thanks for the experiment. I was going to try it again with apples. I'm glad I have some guideposts.

I've been making a list of apple recipes for when I go apple picking...I'm adding these to my list. Looks delicious.

i love the idea of apple treat day! yum! i'm planning on making some mini apple galettes tomorrow if I can find apples at the Tuesday farmers' market:)

Excellent baking! I just knew you would come up with a method to improve the Dimply Plum Cake. I am going to be a copycat, but with peaches.