This week's adventure for Tuesdays with Dorie was the Caramel-Peanut-Topped Brownie Cake, chosen by Tammy of Wee Treats by Tammy. What a delicious choice! 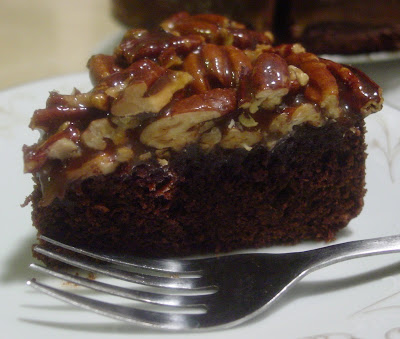 First, I have to say that I don't share Dorie's fondness for chocolate and peanuts together. Separately, great! Together, not so much. I used pecans instead. Chocolate, caramel, pecans -- it's a Turtle cake!

For those who've never seen one, a Turtle candy is made of a disk of caramel coated with chocolate, with pecan halves sticking out at the edges. They really do look like a turtle. I loved Turtle candies in my youth and later fell head-over-heels for Turtle sundaes at Michael's Frozen Custard. No doubt they have contributed to my "well-padded" figure.

I made half the recipe for the brownie cake and baked it in a 6-inch round springform pan. Unfortunately, I didn't check on it soon enough. After 35 minutes in the oven, it was well-done in the center and ended up rather dry. 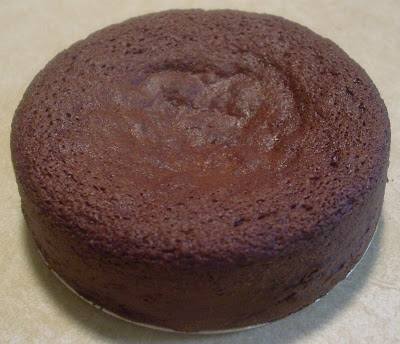 The edges of the cake rose enthusiastically, but the center hardly rose at all. I ended up with a "crater cake." If it had just been a little bit of a crater, I might have gone ahead with it, but with this deep crater I decided to cut off the top of the cake. (The top got crumbled into bits and mixed with extra caramel and pecans. It's now waiting to get mixed into some vanilla ice cream. No wasting of chocolate in this house!) 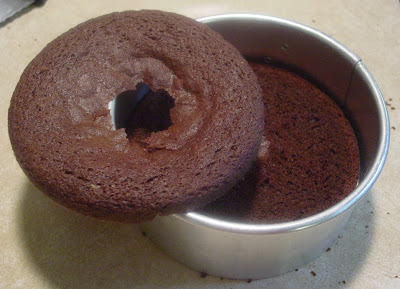 I toasted the pecans on a pan in the oven and sprinkled on some salt. Drat! The salt didn't stick, so I tossed the warm pecans with just a little bit of softened butter. Hey, that worked! The melted butter coated the pecans and the salt stuck just fine! I made a full 1 cup of pecans because, hey, we can always find a use for some extra pecans around here! Good thing I did, because I ended up putting 3/4 of a cup of them onto my half-sized cake. Let's hear it for more pecans!

On to the scary part -- making caramel. I've never made caramel before. I've made a sugar syrup for an Italian meringue and it didn't turn out so well -- all grainy and crystallized. I decided to make the whole caramel recipe, since Dorie said it was easier that way. I had everything ready in advance -- including a bowl of cold water and an ice pack from the freezer in case of burns. (Very handy things, those flexible ice packs. I always keep a few standing by in the freezer, just in case...and the little plastic "ice cube" thingies are great for very small burns. I don't ever put them in my drinks, though -- something about having little plastic thingies in my iced drink just freaks me out.) 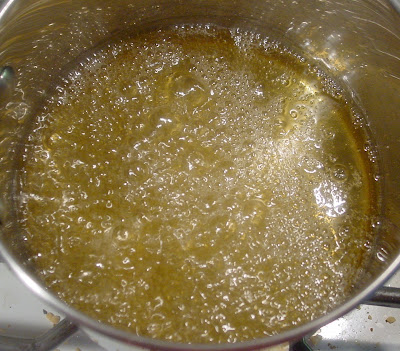 My caramel took a while to turn color. I didn't time it, but it must have been at least 15 minutes, maybe 20. Next time I think I will turn the heat up more at the beginning, then reduce it when the caramel is starting to turn color. The "white plate" test was very helpful -- without it, I would have pulled the caramel off the heat long before it was really done. I think I let it go just a bit too long -- it was pretty dark. I followed Dorie's advice to wash down the sides of the pan with a pastry brush dipped in water and then to NOT STIR. It worked! No crystallized, grainy sugar this time! 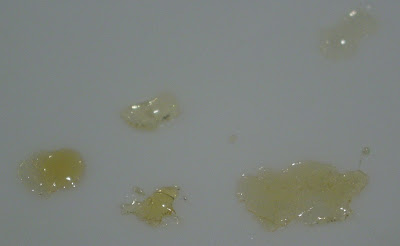 Oh, what a lovely cake it turned out to be! Small pieces were more than enough. Rich, chocolatey, gooey, sweet, crunchy -- wow. 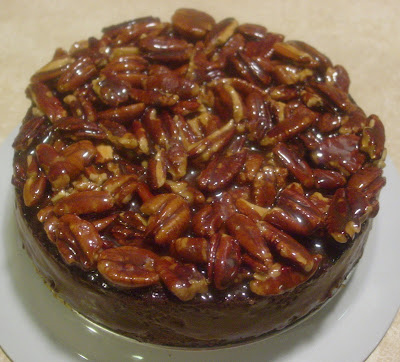 Conclusion: the topping was heavenly. Gooey-but-not-too-gooey caramel, toasted pecans, salt (it really does go well with caramel). The cake could have been better. Part of that was my fault for overbaking it. Even allowing for that, we both agreed we wanted a denser, fudgier, more brownie-like cake. Not completely fudgy -- that would be too much -- but more. Oh, and we wanted more chocolate. OK, we're chocolate fiends. We admit it.

I can see myself making this cake again, but with a different recipe for the bottom layer. (In fact, maybe I'd better. I need to use up the extra caramel.) I'm so happy about my first caramel-making! 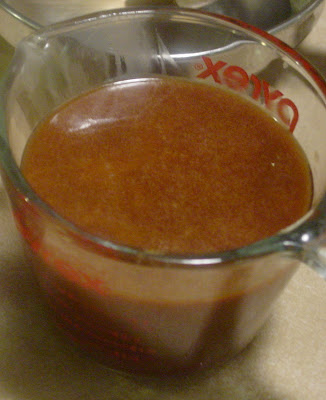 If you want the recipe for this cake, hop on over to Tammy's blog, or better yet, go out and buy the book! And if you want to join in on our weekly baking adventures, better hurry! Membership in TWD is closing at the end of October.
Posted by Bungalow Barbara at 9:06 PM

I agree with you on the cake... Next time I would use a different recipe, I loved the caramel and also used pecans!

Great job on the cake--it looks fabulous! I did pecans, too. Yum. =) I have a bunch of leftover caramel, but I don't know how much longer it will last if I keep eating it by the spoonful...

Congrats on your first time making caramel! The first time I made it was for a Southern Living Turtle Cake and it was amazing! I love turtle cake, cheesecake, sundaes, you name it I don't think you can beat the caramel pecan chocolate combo :) I'm glad that you guys like this cake, I agree that it would have been better if the cake part was more moist. Having the word brownie in the title made me think dense and fudgey so that's why I think I was disappointed. See you next week with the biscotti :)

This looks great! I love the topping. I think I would use a different base recipe next time.

I was still great though, huh?

To cut the top surely let the caramel sink in better, and that must have been heaven!
It was extra sweet, rich and tasty, but yours... with pecans, must of have been even better.
Objectivity is blurred, when Turtles are one's favorite. YUM! BRAVO!

I love that you cut the crater part off. Great idea. I also like your salted pecans. Good job on the perfect caramel too!

I LOVE that you mixed the leftover cake with ice cream! Now THAT is what I call resourceful!

MMMMmmmmm. That looks delicious! I like the idea of pecans as well. Glad to see that nothing went to waste.

Congrats on your caramel! It looks delicious. I wasn't crazy about the peanuts either. Pecans is a much better idea.

my cake was just the opposite, it rose up really tall in the middle. i think i'd also use a different base recipe the next time.

I also went with pecans, and loved it. Great photos, and your cake turned out beautifully!

Congratulations on your caramel! I'm going to have to try again...

I love your turtle cake - it looks gorgeous! I didn't want the temptation of any leftover caramel in my fridge, so I poured the whole lot on the cake and packed it off to work. The caramel is sensational though ...

I think everyone ended up with a crater-cake! It looks so delicious with pecans- I will definitely try it that way next time I make it!

Hi! Thanks for visiting my blog! I totally agree with you, pecans seem so much better than peanuts! Your cake looks yummy!

I love your cake and your caramel turned out perfect. That's great for the first time around. Due to my fiasco I will have to make it another time. I also will use pecans but was thinking of adding salt to the caramel. Hope it works!

Your cake looks wonderful! :) I think my hubs would like it with the pecans on it. :)

I think the next time I make this I will try it myself and pecans sound really good. Yours looks so beautiful! Thanks for stopping by and saying HI : ) So glad your caramel went together easily. Way to GO!
AmyRuth

Thank you for your comments barbara! It sounds like you have been able to accept yourself and your body and treat it in a lovingly way. Great job, I'm still working on it but it gives me a lot of inspiration and hope when I meet someone who has been able to do it!

Such a beautiful cake! And I love the pecans - I wish I had done that!!

Wow, using pecans is even prettier than the peanuts! Can't wait to see this week's post, too...

ciao barbara ! your cake looks terrific ! next time I 'll change the nuts too ! I overbaked the cake too an it's a pity ! for the caramel I've saved some in a jar too maybe for ice cream ? You are right my nuts in the biscotti are hazelnuts. have a nice day !

Great choice to sub pecans. Part of the reason I opted out on this one is that the chocolate-caramel-peanut combo didn't appeal to me but I could go for it with pecans!

You really make that cake look good - or should I say really yummy. I've never made caramel, but I know that my grandson would really appreciate it if I tried.