Like some of the other TWD-ers, I wasn't completely happy with the recipe for the Caramel-Nut-Topped Brownie Cake. I thought it was too dry and not dense or chocolate-y enough. So, I decided to experiment with modifying the recipe. 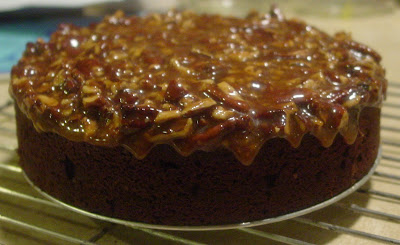 My Baking Adventures had posted a brownie recipe from Marcel Desaulniers, used to make "Death by Chocolate." More chocolate -- less flour -- sour cream -- yum! I decided to more or less "take the average" of this recipe and Dorie's recipe and see what came out.

Here was my first try at a revised recipe:

Place oven rack in center position. Preheat oven to 350 degrees F. Grease an 8-inch round cake pan, line bottom with greased wax paper, and dust with flour. Set pan on a baking sheet and place a silicone cake protector strip around it.

In double boiler, melt butter, chocolate and chili powder. Set aside to cool slightly.
Whisk together flour, cocoa, baking powder, salt, and cinnamon. Set aside.
Whisk together eggs and sugars until well mixed. Whisk in vanilla and sour cream. Whisk in chocolate mixture. Whisk in flour mixture just until combined.

Pour into pan and smooth top. Bake for about 25-30 minutes, until edges are done and center is set but slightly underdone. Let cool. Remove from pan and peel off waxed paper. Top or frost as desired. 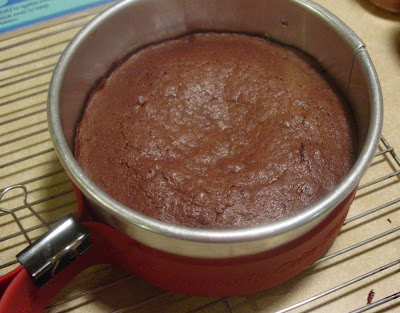 I made a half-recipe in a 6-inch pan and baked it for just 22 minutes -- that's all it needed. The cake was domed when it came out of the oven, but fell slightly in the center. I topped it with leftover caramel and toasted pecans, as per Dorie's recipe. 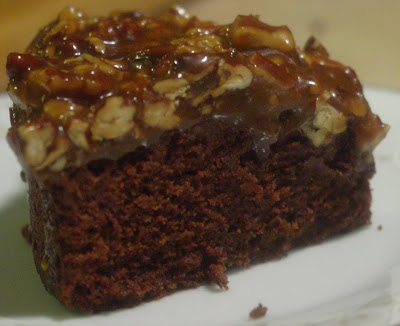 The verdict? This was a much better chocolate cake -- rich, tender and full of chocolate flavor. It still was more like a cake than a brownie, though. I guess I'll have to try cutting down the flour some more. Also, for a more flat and even top, I will increase the baking powder slightly.
Posted by Bungalow Barbara at 8:31 PM

Ciao Barbara this sound much better and looks great ! Your neighbours must faint from the perfumes (?) of your kitchen !

Glad you liked it better. It looks delicious!

Sounds like you're headed in the right direction... The cake sounds yummy, even if it isn't quite right yet. I've been wanting to some up with a better version of this one, too, but just don't have the time right now. Keep up posted on your revisions. =)

I love how you are working to improve this! This looks like a great start. I thought the cake was a tad on the dry side but I did love the topping!

wow! that looks so much better than how mine came out from the recipe! I'm totally taking note of your changes! How beautiful!

Thanks for toying around with the recipe and sharing the results, and especially THANK YOU for posting weights! I've been pondering making my normal brownie recipe and topping it with the caramel peanut (or even macadamia!) sauce.