This week's Tuesdays with Dorie recipe was Lenox Almond Biscotti. Thank you Gretchen of Canela & Comino for choosing this recipe! 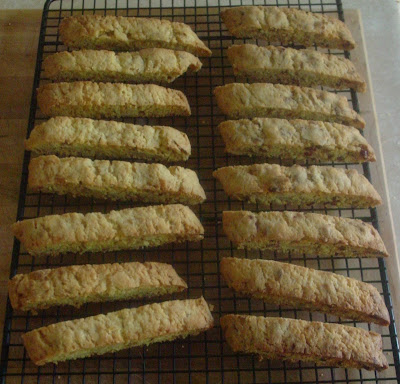 When I think, "I'm going to bake cookies--what shall I make?" biscotti are not usually at the top of the list. But as soon as I saw these biscotti had cornmeal in them, I knew I'd like them. Maybe it's the Southern heritage on my Dad's side. I love baked goods with cornmeal!

Now, should I stay with the basic recipe or do one of the many variations? In the end, I made lemon-flavored almond biscotti, using the zest from two very small lemons plus 1/2 teaspoon lemon extract, 1/2 teaspoon almond extract, and 1/2 teaspoon vanilla. I added about 1/4 cup chopped dried cranberries to one-half of the dough, and 1/4 cup chopped crystallized ginger to the other half.

As I was doing my usual late-night baking, I wrapped up the dough logs and put them into the refrigerator until the next day. This turned out to be a great idea, as it also made the dough much easier to handle. The next evening, I finished shaping the logs and let them warm up a bit while preheating the oven. The first baking took longer than the 15 minutes in the book -- more like 25 minutes. They spread out a fair amount. After cooling the dough for half an hour, I sliced it diagonally. Three-quarters of an inch seemed just too thick, so I went for a half-inch instead. Jim and I shared the ends of each log and agreed they were really good. (Perhaps some day I will try these as "uni-scotti." It might work to freeze the dough in a roll or log and cut into slices before baking once.)

For the first baking, I used 350 degrees on a plain bake setting. For the second one I used 325 degrees on convection bake. I came back exactly 15 minutes later and wished I'd checked on them a little earlier -- the ones from the smaller (cranberry) log were a bit too brown. The ginger ones were perfect.

They were good right out of the oven, but even better after aging for a day or two. The flavors melded and became more balanced. The lemon-ginger ones were our favorite. We could barely taste the cranberry in the other ones. 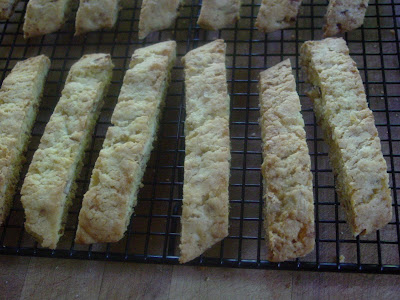 Conclusion: home-made biscotti are yummy! They will be on the cookie baking list in the future. What I'd do differently next time: reduce the sugar to 2/3 or 3/4 of the original amount. These were too sweet for our tastes. And if I'm going to divide the dough in half, I'd divide it more evenly next time. I'd definitely make the lemon-ginger again. I'd like to try cranberry-orange next time, too, using more cranberries and not chopping them up.

If you want the recipe, you can find it on page 141 of Dorie Greenspan's "Baking: from My Home to Yours." Or hop on over to Gretchen's blog. While you're there, check out some of her pictures and stories about Peru. And check out all the other wonderful variations from the other TWDers, too!
Posted by Bungalow Barbara at 5:30 PM

Weren't these good? I know other people weren't crazy about the cornmeal, but I agree with you - I liked it. And yes, the uni-scotti were pretty good already!
Audrey

Im so glad you liked them. I think your biscottis looks wonderful.

I think these were a big hit all over. Yippee! I loved the corn meal too. Big corn bread lover especially with molasses on top yumm!

Thanks for coming by for a visit.
AmyRuth

I also got excited when I saw the cornmeal - I don't know why others were so down on it! Your biscotti look just great, and I want to do what you did next time, make them and chill them before baking.

I loved these too! Yours are perfect looking. Mine came out a bit flat, but tasted wonderful nonetheless. I liked the cornmeal in them as well.

Crystallized ginger! What a great idea. I wasn't jumping up and down about the idea of these, but they were great.

Excellent baking!- I love the fact that you tried different combinations. The ginger lemon would be my favorite too.

Lemon ginger sounds great. I like cornmeal baked goods too. My favorite pie is apple cranberry with a cornmeal crust. Delish! Your cookies look yummy. :)

Another conversion story! Your lemon and ginger ones sound amazing.
Nancy

Love your variations! Wish I were that adventurous!

Thanks for stopping by my blog. I love that there are so many variations on this stuff, gives so many ideas! Yours look and sound great. I loved the cornmeal.

Oh, and your cake from last week looks divine. LOVE the pecans and turtle cake! Now I want to make it again.

Yours look very good. The lemon sounds wonderful too!

I totally wanted to do the lemon zest but I forgot. Ooops! Definitely next time along with your dried cranberries variation. I love craisins! Glad you enjoyed the recipe!
Clara @ iheartfood4thought

I liked the cornmeal, too. Great variations--I love the idea of crystallized ginger and cranberries as additions.

Oh, the ginger ones sound awesome. I love ginger cookies! Your pictures are lovely.

ooo I am going to have to try the flavours you have used, they look and sound delicious.

Yum, I love all your variations! I pretty much love any cookie with crystallized ginger in it. :) Yours look lovely!!

We did similar things, like refrigerating the dough, which I think helped a lot. These were a big hit at my house, too, and far superior to commercial biscotti.

I've been thinking of you up there in Wisconsin with all the leaves turning, etc.

Your biscotti look wonderful and the flavor combinations excellent...I am going in that direction soon. These were so easy...I just need to practice presentation a bit next time as the taste was wonderful. There are none left...my guys devoured them.

Thanks for all your helpful insights and tips each week...you are a gem!

Hee - Biscotti has NEVER been at the top of my cookie list either but I liked these. Ginger sounds fabulous.

Great idea to chill the dough. I love your flavorings.

why didn't *I* think to add the crystallized ginger?! you're so smart :) i will have to try that next time.

Great looking biscotti! So you are like me - a biscotti convert. Aren't they delicious?

I guess a lot of good recipes do start of with mistakes similar to mine... But the bulgur was not an improvement!! Hahah I much prefered the second batch with cornmeal!

I love the idea of lemon ginger. That is my favorite scone to make, why not biscotti! I will do that next time. Thanks for sharing!

All your combinations sound delicious. That's what's nice about this recipe -- customization.

I think there were a lot of biscotti converts this week. I'm glad you liked them. Your variations sound delish!

What a wonderful flavor combo! And they look beautiful too. :)

Barbara!! They look FAB!! Great job! I am going to make them again too! Right at the top of the list with these.....

I love that you knew you'd like them with the cornmeal - so opposite of so many others! Lemon ginger had been in my mind, glad to hear you liked it!

I skipped these but I regret it now - I had the same reaction as you to a biscotti recipe but it seems so many people who don't normally like them enjoyed these. I'm going to have to try them!

yummm...lemon ginger sounds like a winning combination! i too have southern roots (on my mom's side), and so cornmeal is a staple. now, find a recipe with both cornmeal and buttermilk and it's heaven:)

thanks so much for your baking book suggestions, barbara!

Hi! Great idea about chillin' the dough then slicing off a few as you need them. Brilliant! :)

I also like the cornmeal in the biscotti. Your variations look great and must have been so delicious!