I got a late start on this week's "Tuesdays with Dorie" project, but no way was I going to skip this week's French Almond Tart! How could I pass up a chance to bake along with Dorie herself on the recipe she'd chosen? 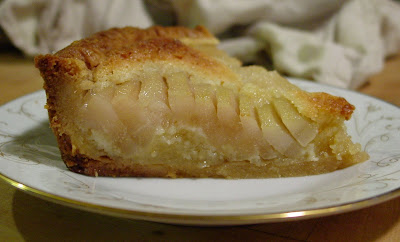 Dorie says this is her husband's favorite dessert. It didn't quite reach that point on our "charts" -- a really good fruit pie or galette is still in the lead -- but I can certainly see why Mr. Greenspan loves it! A tender pastry crust, lovely crunchy/creamy almond filling, and sweet, subtle poached pears ornamentally sliced on top. Oo-la-la!

I made the almond cream as written -- well, almost. I had an extra tablespoon or so of finely ground almonds, so I just tossed them in rather than waste them. Oh, and I reduced the sugar to 9 tablespoons because we like things less sweet. This stuff was yummy! I had to restrain myself to keep from eating it up before it made it into the tart.

For the poached pears, the only change I made was to add a few strips of lemon peel to the poaching liquid, then strain it out after the pears were done. I didn't poach the pears long enough, though. When I cut them up for the tart, after a few days sitting in the poaching liquid in the refrigerator, I noticed a brown layer around the core of each one. (You can really see it in the pear at 10:30 o'clock on the picture below.) The cores themselves were very firm and almost uncooked. A taste test revealed the pears still tasted fine, though, so I went ahead and used them. Next time I will poach them longer. I may even cut them in half and core them before poaching. Also, next time I'll buy some extra pears in case some of them turn out to have hidden bad spots (as one of mine did). There will be no problem finding a use for extra pears! 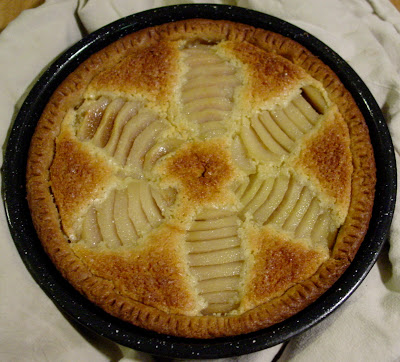 My pears were rather small and had short stubby tops. I wasn't sure they'd fill up a 9-inch tart pan, so I used an 8-by- 1 1/2 inch round cake pan instead. That left me with some extra tart dough, which got turned into dough cookies. (By the way, someone or other on the TWD blog list introduced me to the idea of calling dough cookies "dodos" -- I love it! Thank you, whoever you are.) Because of the higher sides of this pan, I used pie weights when prebaking the tart shell. I was afraid the sides would soften and slither down the sides without the weights to hold them in place. It only took about 20 minutes to prebake. I brushed the bottom and sides with a bit of egg white mixed with water and popped it back in the oven for about 15 seconds -- this helps to seal the crust and keep it from getting soggy.

In went the whole recipe of almond cream and on went the sliced pears. I put an aluminum ring over the tart dough around the edges to keep it from burning. My tart only took about 45 minutes to bake, and it was very brown indeed on the top and around the edges. However, the almond cream in the middle and bottom seemed only barely done. Probably this was because of using such a dark colored pan -- plus maybe a little because of using a smaller, deeper pan. I should have reduced the oven temperature by 25 degrees. Oh well, another thing to try for next time.

This was delicious! I'd love to try it with a more intensely flavored fruit, like plums. It would be a great dessert to serve to guests because it can be made mostly in advance and looks harder to make than it really is!
Posted by Bungalow Barbara at 8:44 PM

Email ThisBlogThis!Share to TwitterShare to FacebookShare to Pinterest
Labels: fruit, pies and tarts, TWD-Tuesdays with Dorie

Your tart looks lovely, Barbara. I'm glad to know that the white whole wheat worked well. I also thought about using some of my whole wheat pastry flour for the crust. Maybe next time.

I love how you took the picture from the side! It was a wonderful recipe!!

Very Beautiful! I'm glad you had a chance to make this. It seems like it was a hit everywhere!

I've only used the white whole wheat for bread, which we've really liked. I'll have to try it in our sweets, too!