Here's the latest cake for the Heavenly Cake Bakers group. It's the Double Chocolate Valentine cake, as published in Rose Levy Beranbaum's "Rose's Heavenly Cakes." In fact, it's the cake on the back cover of the book. It made a previous appearance as the Double Chocolate Sweetheart cake in "Rose's Celebrations," where it was on the front cover. And it's appeared in a video that is posted on Rose's site. 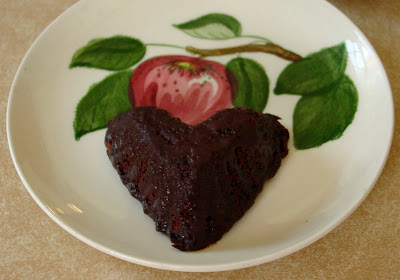 This recipe is based on the All-American Chocolate Torte from Rose's "The Cake Bible." After baking, the cake is then soaked in chocolate ganache. Ooh, yes! All you have to do is say "ganache" and I start salivating. Funny, a few years ago I didn't even know what it was. (Just a fancy French word for melted chocolate mixed with heavy cream. It's the stuff inside of chocolate truffles. 'Nuff said.)

I decide to make a half recipe of both the cake and ganache. (Portion control.) And to skip the fresh raspberries on top. Growing our own raspberries has spoiled us for out-of-season fruit. 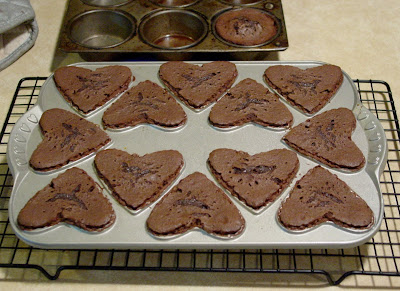 I made mini cakes in my Nordic Ware heart pan. As you can see, I overfilled them a bit. I had just enough batter left over for one cupcake. Next time I should portion out two or three cupcakes first, and then use the rest of the batter for the heart pan. Oh well, live and learn.

Time to poke holes in the cakes. Wait a minute -- where are all the bamboo skewers? Oh, that's right, they're in the "gardening supplies" box (sticks for plant labels, if you're wondering). OK, I'll use the stem of my cooking thermometer instead. That made nice big holes -- next time I won't even look for the skewers.

There's a downside to having the mini cakes extend above the top of the pan -- the ganache ran all over the place when I brushed it on. What's more, I used up almost all of the ganache just for one side of the cakes -- even after scraping off and re-using the part that ended up on the pan. So, I just whipped up another half-recipe of the ganache and used it on the other side. What could be wrong with more ganache?

Getting the cakes out of the pan was tricky. The ganache made them stick. I think I need a blow dryer (not that either of us would ever use it on our hair.) Several of them fell apart. Some could be patched back together -- ganache also makes a good cake glue -- but some were beyond repair. Oh well, consider it the cook's bonus. And the cook's husband's bonus too.

Despite the difficulties, these were wonderful. The cake was very light, fluffy, and tender. It might have been a little dry without the ganache -- but with it, ooh la la! Chocolate heaven!

Waiting for them to chill and set was the worst part. Not all of them made it to that stage. By the way, once chilled, a quick 10 seconds in the microwave warms up the cakes and does wonders for the flavor.

I'm not sure this is the ideal recipe to use for mini-cakes that have to be unmolded. The cake recipe is so tender that it tends to fall apart easily. Probably better to use paper cupcake liners and leave the cakes in them, like Vicki did. But aren't the little hearts just adorable? 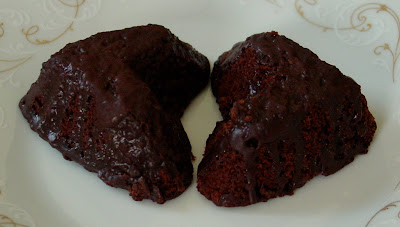 Posted by Bungalow Barbara at 10:57 PM

I enjoy reading your blog Barbara, because you never seem to mind when things go wrong, and you don't seem to mind owning up to things going wrong either! As we all know mistakes do happen in our kitchens especially when making a new recipe for the first time, that's how we learn, from our mistakes! so long as we remember for the next time, eh? LOL! Jeannette

I like your little hearts very much. What a great pan. If it would be possible to slice them and layer with raspberry mousse, I'd prefer to cupcakes. Maybe putting in the fridge to firm them up and then slice? I might try that next time.

Adorable... and just the perfect size!

Oooh I like that pan you used. Try taking them out of the pan first prior to brushing them with the ganache. Given that you have more surface space when making smaller cakes, it makes sense that you had to make more ganache. But who's going to complain about that? :o)

Cool pan--I love the little hearts. My husband just got me Rose's Heavenly Cakes for Valentine's Day, and I can't wait to try some of these wonderful cakes!

Your mini hearts look so cute!