My last catch-up post with Tuesdays with Dorie -- I've been baking along more or less on time, but haven't gotten around to posting until now. For the week of February 2, 2009, Kristin of I'm Right About Everything chose the "Milk Chocolate Mini Bundt Cakes" from pages 188-189 of Dorie Greenspan's "Baking: From My Home to Yours." 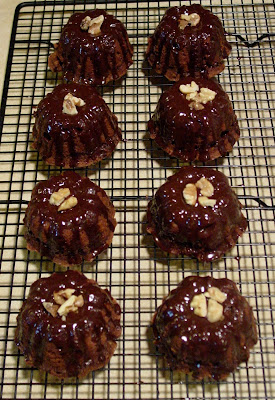 Aren't they cute? I made 12 of them, but between Jim & myself, we scarfed up 4 of them before I could even get around to putting on the glaze. Yes, they were good.

How could I resist using my new Bundt Cupcake pan? It has 12 cups and each one holds about 1/4 to 1/3 cup of liquid for a total capacity of about 3 to 4 cups. The batter filled the pan almost to the top, and rose a bit above the pan when done -- but that was OK. 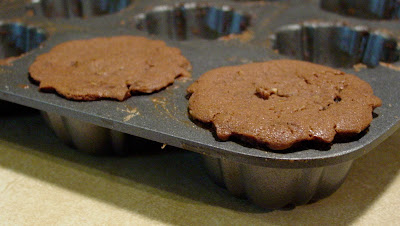 I need to work on my streusel-filling techniques, though. I put way too much batter in before putting in the cocoa-sugar-walnut streusel, and after that, spreading the rest of the batter on top of the streusel was hard. Plus, there were a lot of "gaps" on the outside of the mini-cakes. Next time I use this pan, I'll put a little bit of batter in the pan and spread it around with a small spatula or the back of a spoon, squishing it up against the sides to eliminate any gaps. Then I'll finish filling the pan. 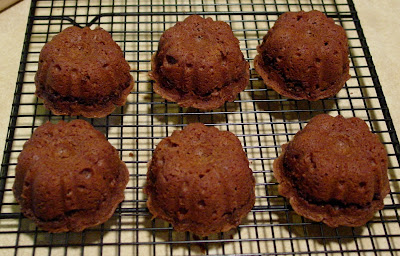 Still, a good thick drizzle of glaze covered the flaws well. Since many folks had reported having trouble with the glaze recipe as given, I went with a plain ganache glaze instead -- 2 ounces of bittersweet chocolate and 2 ounces of cream.

While we both agreed we wouldn't mind a bit more chocolate flavor in the cakes, they were still delightful. Making 12 tiny cakes might sound like good portion control -- but we found we couldn't eat just one! Two apiece was just right.
Posted by Bungalow Barbara at 4:20 PM

The Queen of Quite a Lot said...

They look so good! Thanks so much for baking with me this week!