This week's Tuesdays with Dorie challenge was Kugelhopf, chosen by Yolanda of The All-Purpose Girl. Definitely a challenge, especially since I was mixing it by hand! There were times I wanted to give up, but the final result was very tasty. For the recipe, see "Baking: From My Home to Yours," by Dorie Greenspan, or check out this link. 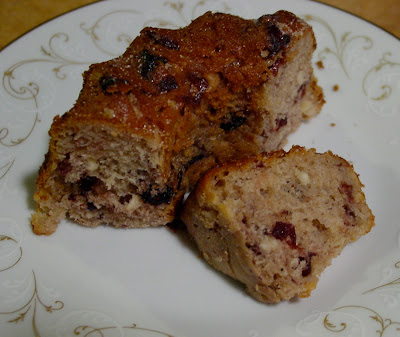 I'm not quite sure what Kugelhopf means -- or even how to pronounce it -- but it turns out I already had the pans to bake it. (I picked them up on sale at T. J. Maxx some time ago, thinking they would be good for smaller Bundt cakes. This was their first use!)

One of the reasons this recipe was a challenge for me was that I don't have a stand mixer. Dorie does say the recipe can be made by hand, so I went ahead and tried it. Stirring the eggs into the stiff, dry flour/milk/yeast mixture turned out to be difficult, to say the least. I ended up with a something that was more like a sticky batter than a dough. Then I had an idea -- what if I put on some disposable gloves and tried mixing/kneading the dough with my hands? All I can say is, "DON'T DO THIS!" Most of the dough stuck to my hands. Picture me looking upset and frustrated, holding out my strange-looking hands to my husband while he patiently scraped off most of the sticky, sticky dough and plopped it back in the bowl. It was quite a relief to pull off the sticky gloves and toss them in the trash.

I went back to mixing the dough with a silicone "spoonula." It was a lot of work. I wasn't sure I'd mixed it enough, but the dough did develop a texture that Caitlin of Engineer Baker aptly described as being "stringy like melted mozzarella." At that point I said, "I give up." My butter was well-softened, so stirring it in was not that hard. I mixed in my dried fruit, covered the whole thing with plastic wrap and set it in a warm place (the back of the stovetop) to rise. Then I went upstairs--I had to lie down for a while to recover from the stress of it all!

Oh, as far as changes to the recipe -- I used instant yeast but did not change the amount of yeast. I added 1 teaspoon of vanilla extract and 1/2 teaspoon of orange extract to the measuring cup, then added enough milk to make 1/3 cup total. I weighed my eggs since I buy medium rather than large eggs. (This recipe calls for 100 grams of whole egg and 19 grams of egg yolk.)

For fruit, I used 1/3 cup of dried blueberries, and 1/3 cup of dried cranberries. I heated them with 3 tablespoons of water, then flambéed them with 3 tablespoons of brandy, following the directions for flambéing raisins in Dorie's French Chocolate Brownies. Wow! That part was fun! (My husband was very nervous, but I managed to do it without burning anything. And what a spectacular show of blue flames!)

The dough rose very nicely in about the time Dorie specified. There was no way I could "slap" it down, though. It was still way too sticky for that. So I stirred/poked/squooshed it down with my trusty spoonula, and popped it into the refrigerator. I squooshed it down again after about half-an-hour, but then it was time to go to bed. I left the dough in the fridge for about two days, then took it out to bake it up.

The cold dough was easier to work with. I could actually handle it with lightly oiled bare hands without it sticking to me very much. I spooned out spoonfuls and squooshed them down into the bottom of my two half-size Kugelhopf pans. They only filled the pans about one-quarter full. Hope this works... By this point I had discovered that my electric oven has a "bread proofing" setting, so they went into the oven to proof. (Our new stove is wonderful, but sometimes I have trouble keeping track of everything it can do!) That really sped up the rise -- by 1 hour and 15 minutes, the dough had risen to at least twice its original volume and was looking quite bubbly. (On consulting my oven's manual -- yes, I actually kept the manual and even know where to find it! -- I discovered that the proofing temperature can be adjusted. I had left it at the default of 100 degrees F. Next time I'm setting it lower, to 85 degrees F.) 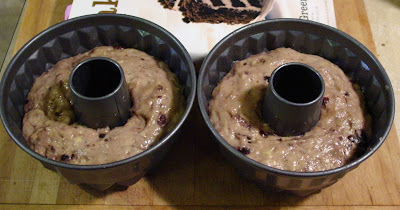 OK, preheat the oven and bake them. Tent with foil after 10 minutes. After about 12 minutes more they looked nice and brown. They rose a little bit more. I pulled one out and tested the center with a thermometer--190 degrees, yes, that's what Rose Levy Beranbaum recommends in her brioche recipe in The Bread Bible. 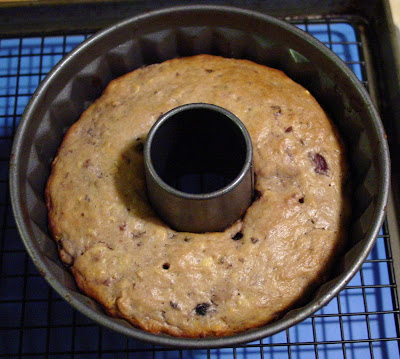 Pull the other loaf out, unmold it -- no problem! Go back to the first loaf to unmold it -- yikes, it's sticking to the pan. I had to run a small knife around the edges, which certainly did not improve the looks of the bread. Could the extra couple of minutes in the oven have made that difference? I guess so. Oh well, the crumbs were very tasty. 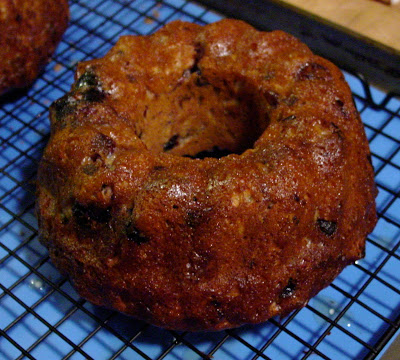 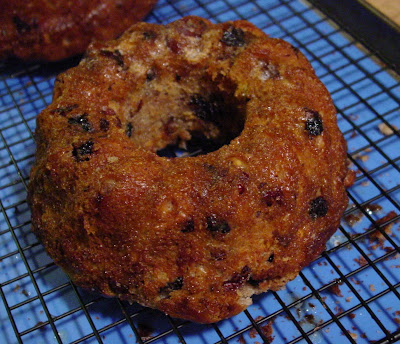 The verdict after cooling and slicing? Yum! Very light and fluffy. (Perhaps I should have used a little less yeast, since it was instant rather than dry yeast.) The dough came out oddly brown-colored, considering it was made with all white flour. I think the juices from the blueberries and cranberries bled into the dough. (And using twice the amount of berries turned out just fine.) The orange extract seemed a little strong -- next time I'd cut down on it or use orange zest. There were a few odd little white lumps in the bread which I think were remnants of the original flour/milk mixture that had never quite been incorporated, due to hand mixing.

I'm glad I persevered with this recipe! I'm not sure I'm going to make it again until I get a stand mixer, though. If I hand mix again, I think I will use a mixing method from Bernard Clayton's "New Complete Book of Bread" (brioche recipe) -- I'll start by mixing just half the flour with the milk, then beating in the eggs, then gradually beating in the rest of the flour, and then the butter. I think that might work better.

For more Kugelhopf, check out the rest of the adventurous Tuesdays with Dorie bakers!
Posted by Bungalow Barbara at 3:14 PM

Email ThisBlogThis!Share to TwitterShare to FacebookShare to Pinterest
Labels: breads, TWD-Tuesdays with Dorie

Kudos for making it sans mixer! I can just imagine you throwing up your sticking gloved hands b/c that dough was sticky! Glad you persevered and enjoyed the recipe.
Clara @ iheartfood4thought

I like the smaller pans, and your finished cake/bread looks great! Until reading your post, I'd forgotten that I, too, took my kugelhopf's temp to see if it was done! =) I went with the instant yeast, but cut it back to one teaspoon, and didn't have any problems with it rising. I wish I'd thought to increase the fruit like you did.

Mine was sticky too. And I added more flour as it never did 'climb' the hook. Flaming Kugel. Love it. I would probably burn down my kitchen. They look cute and yummy tho'.

Cool pans. Your experience rated right up there with mine. This was a sticky dough! I think the orange extract would be an option I might try. Thanks for the idea.

Great job!! I did mine without a mixer as well. My arm hurt... Looks like yours turned out really nicely!

I am so impressed you made yours without a mixer! WOW! Yours looks great though! nice!

I'm glad you like this recipe. I can't believe you made it by hand. That's dedication!

No suprise you needed a nap after that recipe with no mixer! Mine ran for at least 15 minutes and was still sticky. I like your addition of extact, and brandied fruit. I would increase the fruit too because the raisens were too far and few between. Yours look great! Amanda at www.livingintheboot.squarespace.com

That's a real workout, making kugelhopf without a mixer! I admire your arm muscles. :) Your finished product looks delish!

MMMMmmmm What nice caramelized crust you got on your kugelhopf! Very, very temting!

What determination! clapping here Anyway, so fun to use those pans, right? They are beauties. I love reading about your baking adventures. Great Post.
AmyRuth

Kudos for not giving up! I almost threw my dough out and I used a stand up mixer.

Your Kugelhopf came out great! Good idea to use two pans!

I actually used my little $12 hand mixer, one day that sucker is going to melt on me. I had to use a small spatula to keep the dough from going in the vent holes on it.
I love love love TJ Maxx. I am there and at Target 2-3 times a week. I will keep my eye open for more things for baking now that I have joined TWD. Congratulations to you for buying the pans ahead of time.
I have some dried blueberries, what else would you do with them?
All I can say is big kudos to you for doing this all by hand. Wow.
And I love the plate the Kugelhopf is on, very nice detail.
One more thing, I love shaker lemon pie.

By hand?! Holy smokes! Blueberries were part of my fruit mix. Nice job!

You went above and beyond for this one. Mixing by hand... kneading with disposable gloves... (My dough was incredibly sticky, too)

The blueberry and cranberry combination is interesting. The final product looks great!

What a pretty plate! I can't believe you made it without a mixer. The end product looks delicious and I love the fruits you used together. Nice job tackling a fussy dough and making it work!