Drat. Once again I'm a member of the "Thursdays" with Dorie group.

So, this week's Tuesdays with Dorie project was Rugelach, chosen by Grace of Piggy’s Cooking Journal. For the recipe, check out the book or see this post. You can also find more information here, here, and here. 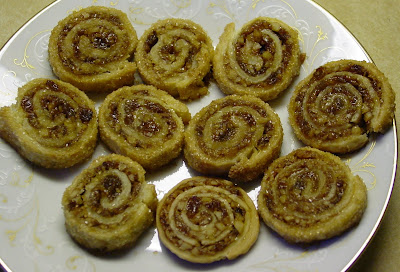 I love rugelach! They are one of the treats that destroy my self control. I can't stop eating them! I ate half-a-dozen pinwheels right out of the oven and the rest have vanished within a few days. These are dangerous cookies -- I have to ration how often I make them.

A confession -- I did not make Dorie's rugelach dough recipe because I already had dough stashed in the freezer down in the basement. I can't quite remember which recipe I used -- probably either Cooks' Illustrated or Rose Levy Beranbaum's from "Roses's Christmas Cookies." At any rate, both recipes are quite similar to Dorie's, although they make twice as much.

I'd formed the dough into small rectangles before freezing it, because I wanted to try "pinwheels" instead of crescents. So, I rolled out the dough into a rectangle about 9 by 12 inches, or a little smaller. I started with Dorie's filling proportions, using apricot preserves, walnuts, golden raisins, and no chocolate. I like Dorie's amount of jam, but ended up doubling the amounts of the nuts, raisins, and cinnamon sugar. Let's hear it for more filling!

One roll got rolled up along the long, 12-inch edge for a longer, thinner roll, and the other along the shorter, 9-inch edge for a shorter, fatter roll. I froze the rolled-up dough overnight, then sliced it to various thicknesses, rolled in Demerara sugar, and laid down on one of the cut sides to bake. 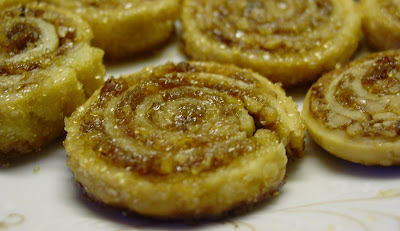 My conclusions -- I preferred the longer thinner rolls cut to 3/8 inch slices (they flatten out and spread as they bake). The half inch slices were too thick for my taste. The 1/4 inch slices of the fatter rolls would be my second choice -- they came out quite thin and wide, which was pretty. However, they tended to split around the outer edges.

I like the pinwheel shape for two reasons: first, you can store the filled roll of dough in the freezer easily, and bake up as needed. Shaped crescents take a lot more room in the freezer. Second, they avoid the "underbaked dough in the center" problem you sometimes get with crescents. 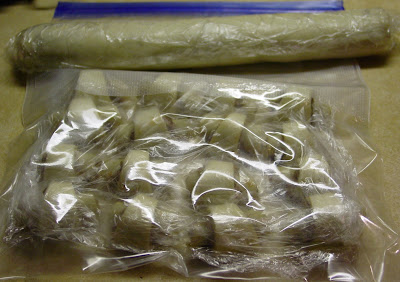 With the remaining dough I made a batch of crescents and another roll. Into the freezer they go, ready for my next rugelach binge! 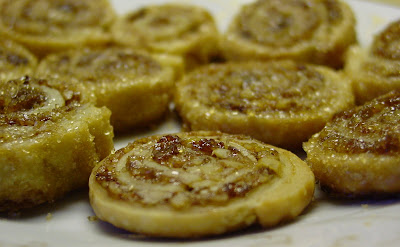 Posted by Bungalow Barbara at 7:10 PM

Thursdays okay with me - I always enjoy your posts. Love the pinwheels.

Hi Barbara,
Thank you for being the very first person to comment on my blog! I love the idea of making the pinwheel dough to bake later.

I'm with you - they ARE dangerous cookies. And hey - I'm a member of the Thursdays with Dorie club, too, so - Welcome! :) The pinwheels look great - I may try those next time (which could be today). Good job!

A great idea shaping pinwheels, that makes it much easier

Your pinwheel rugelach look absolutely perfect... I have to admit that I ate a lot of these cookies, as you say: dangerous!!

I rolled mine up like yours, but I cut them thicker (about an inch wide) and baked them standing up. Yours look good, with all that filling. Yum. =)

The pinwheel variation looks great, very pretty presentation! I didn't even measure the filling ingredients as I was assembling mine, but I'm pretty sure I more than doubled Dorie's measurements for all but the jam - I'm with you, more filling = better :)

I love the pinwheel idea and will try that myself the next time! Yours look great.