This week's assignment for "Tuesdays with Dorie" was the Thanksgiving Twofer Pie. Many thanks to Vibi of La Casserole Carrée for choosing it, and to our founder Laurie for extending the usual posting deadline so we could make it for Thanksgiving! 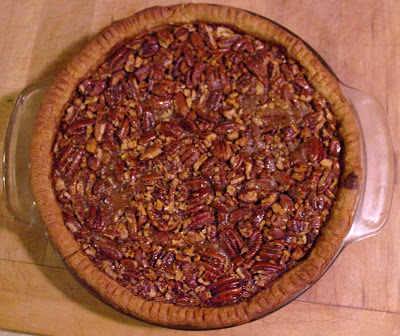 Thanksgiving is an important holiday in our household, even though it's just the two of us. I'm generally able to get off work that day (by agreeing to work Christmas Eve and New Year's Day). It's a day to cook, eat, and enjoy life before returning to work. Since I work for a large mail-order company (in the Internet division), work at this time of year means all the craziness of Cyber Monday and pre-holiday shopping. It's good to celebrate beforehand! 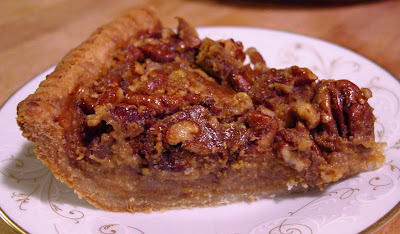 The thing is, we always have some sort of fruit pie for Thanksgiving. Neither of us likes pumpkin pie (it's just so...pumpkin-ey). Pecan pie is not bad, but generally much too sweet. I was pleased to discover that I like Dorie's pie better than either one. The creamy, spicy pumpkin filling on the bottom helps to balance out the sweet, gooey, nutty, crunchy pecan pie topping. Jim, however, was not as impressed. He's still complaining that he didn't get a fruit pie this Thanksgiving. (I'll bake him one for Christmas instead.)

I made some changes to Dorie's recipe. First, I used a Sweet Pastry Tart Dough crust rather than a Flaky Pie Dough crust. (It wasn't Dorie's recipe.) There were two reasons for this: 1) the pastry crust had been in the deep-freeze for almost a year, and it was time to use it up and 2) pastry crusts tend to get soggy more slowly than flaky crusts, and since there would be only two of us eating the pie, it would have to be stored for several days.

The other changes were: I reduced the light brown sugar in the pumpkin filling to 6 Tablespoons, used half heavy cream and half milk, and used half a whole egg in place of an egg yolk. (I used the other half egg in place of the egg yolk in the pecan portion.) I increased the spices in the pumpkin filling slightly and cooked the pumpkin puree, sugar, salt, and spices together (a hint from Rose Levy Beranbaum's pumpkin pie recipe from The Pie and Pastry Bible.) I had to make an unplanned substitution as well -- I had scooped the pumpkin, sugar, etc into a pan when I suddenly suspected I'd been scooping from the salt container, not the sugar container. A quick taste confirmed it -- yuck! So that batch had to be tossed. I didn't have quite enough pumpkin puree left in the can, so I had to improvise. I pulled out some unsweetened, unflavored home-made apple butter from the fridge and used that to "top off" the pumpkin puree. It worked out just fine. In fact, I am considering making this pie just with apple butter next time! (I'd have to reduce the sugar, I suppose.)

For the pecan pie topping, I used Lyle's Golden Syrup instead of corn syrup (another idea from Rose), and reduced syrup to 6 Tablespoons and sugar to 3 Tablespoons. I managed to forget to add the melted butter, but remembered after I'd poured the filling on the pie -- so I quickly melted some butter in the microwave, poured it over the top, and did my best to mix it into just the pecan part of the pie. It seemed to work out in the end.

I prebaked the pie crust as Dorie directed, keeping the edges covered with foil the whole time. A number of folks had mentioned in the "Problems and Questions" area that they were having trouble with burning crusts and slow baking times for the filling, so I decided to adjust Dorie's baking instructions a bit. I started the filled pie off at 400 degrees for 10 minutes, then turned the oven down to 325. I kept the edges covered with a pie shield the whole time. It took about 50 minutes, total, for the pie to bake that way.

Oh, one other thing I always do with pies -- I set a rack to one of the lower positions in the oven and put a round pizza stone on it before I preheat the oven. I set the pie right on the stone to bake (covering the stone with a sheet of aluminum foil if the pie is likely to bubble over). This helps to set the bottom crust and prevent soggy crust. Yet another Rose suggestion!

I really liked this pie! But since Jim wasn't a big fan, I'm not sure it will be returning to our household all that often. I may try a version with apple butter instead of pumpkin puree and see if he likes that any better. Meantime, see what the other TWD bakers did!
Posted by Bungalow Barbara at 6:33 PM

Thank you so very much Barbara, for participating with me this week! ...oops! sorry Jim, for the fruit pie! LOL
I'm glad the pie turned out fine with all those changes, new crust and Rose's baking techniques! (I too have always baked my pies at the lowest rack for 15 minutes, then on center rack for the rest of the timing - a technique that equals Rose's I guess).
It looks truly delicious! BRAVO!

Your pie looks great! As always, I appreciate how much detail you give on how you made the recipe. I did some of the same things--the golden syrup was great in the top part, and I usually bake my pies directly on my baking stone, too.

Beautiful pie! And I love how you improvised to suit what you like.

Picture perfect pie...very impressive! We loved it...I think we would love yours even more as it looks better than mine! Thanks for the pizza stone idea...and covering it with foil sounds like just the trick! Great post.

this is my husbands favorite pie, I am going to have to learn to make it...looks great.

Wow, close call with the salt. Nice catch and great improvising when running out of pumpkin. Thanks for the baking tips. The pizza stone is a great idea that I will try with my next pie.

I love all the suggestions in your post. Great job on the pie! The apple butter idea sounds very interesting - I'll have to make a note of that.

Your pie looks perfect! Thanks for the baking stone tip - I'll have to try that!

Your pie looks delicious! Thanks for all of the tips. I'm going to try baking on a pizza stone in the future. I didn't make this one because we were already going to have four pies for 12 people!

Awesome idea with the pizza stone. I will have to try that!

your twofer pie looks great! thanks for the compliment on the blueberry tarts - i also made cherry and apricot versions and they were super tasty. :)

Your pie is beautiful!!!!! Glad that you had a wonderful Thanksgiving!!!!