Some folks over on the forums of Real Baking With Rose decided to issue a Charlotte Challenge. The challenge was to bake one of the charlotte recipes from Rose Levy Beranbaum's "The Cake Bible." (If you'd like to see the other results, please visit this link. Sorry, no recipes are posted -- you'll have to consult the book.)

I was thinking of making the Ethereal Pear Charlotte, but then -- it turned out organic lemons were on sale at our local food co-op. So, I decided to make an Ethereal Lemon Charlotte instead. Although it turned out more of a "moderately fluffy" half-sized lemon charlotte, it was still good! 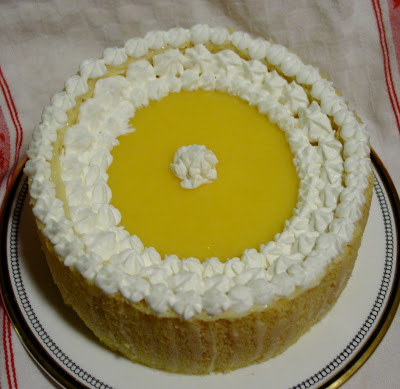 The components are: Almond Biscuit Roulade (p. 142-144) and Pierre Hermé's Lemon Cream (from Dorie Greenspan) for the shell, Lemon Cream Illusion (p. 266) for the filling (with Super-Stabilized Whipped Cream, p. 256, added because I messed up the meringue component), Lemon Curd (p. 340-342) for the top, with whipped cream for decoration.

The original Ethereal Pear Charlotte recipe (p. 175-177) calls for a shell made from Biscuit Roulade (a French sponge cake), stuck together with raspberry jam. I went with Almond Biscuit Roulade (p. 142-144), and since this was going in a 6-inch round pan rather than a 9-inch round pan, I just baked one sheet. That was enough with a little left over.

I'm quite pleased with how the roulade turned out -- I've only made it once before. That time it was Chocolate Roulade, and I overbaked it so it was kind of dry and rubbery. Also, I might not have beaten the egg/egg yolk/sugar mixture enough that first time. (This is amazing to watch. I kept beating it with my hand-held power mixer, switching the mixer from hand to hand as I got tired. It just kept getting lighter and lighter, fluffier and fluffier... Eventually it reached a stage where the beater marks were persisting and it formed a very thick, slow ribbon when I raised the beaters. "Patience, Grasshopper," is the key to this process.)

This time, the Biscuit was just right -- moist, fluffy, and springy. I still thought it was rubbery compared to, say, butter cake -- but I suspect that's how it is supposed to be. After all, it is mostly beaten eggs. Sort of a souffle-cake. I found myself gobbling up the trimmings -- always a good sign!

I was thinking of lemon curd for the "glue," but didn't feel like making an extra batch of lemon curd. What's more, there was some luscious lemon cream stashed in the freezer. (Fabulous stuff! Invented by French chef Pierre Hermé. Do try it some time. Here's a link to the recipe, and here are some hints.) So, the lemon cream became the "glue."

Making the charlotte shell is a bit of crafts project -- cutting out 2.5 inch wide strips of Biscuit, layering with the lemon cream, wrapping and freezing...then, next day, cutting the layered strips and fitting them into the spring-form pan. Then, trim and insert the bottom layer, coat it all with a bit more lemon cream (just because!) and refrigerate. Phew! 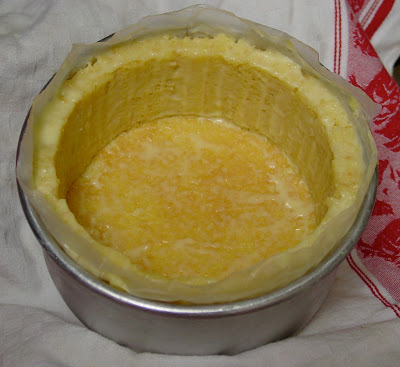 Now for the filling: I was hesitating between lemon curd lightened with whipped cream, or lemon curd lightened with Italian meringue. The idea of being able to use up the egg whites left over from the curd won out. OK, the plan was: make one recipe of Rose's Lemon Curd (p. 340-342) using only 1/4 cup sugar. Divide it in half and add more sugar (2 Tablespoons) to one batch. Use the less-sweet batch to make a half-recipe of Rose's Lemon Cream Illusion (p. 266), use that for the filling, and then spread the sweeter curd in a thin, smooth layer over the top.

Making the curd went well. I took the time to zest and juice all 10 of my on-sale lemons. The extra juice is now frozen into cubes and stored in the freezer. I mixed the zest with an equal weight of sugar and twice the weight of vodka, and put it into a jar in the fridge. In a few weeks, I will strain out the zest, store it in the freezer (it can still be used for flavoring, just use more), plus I'll have some home-made limoncello!

A couple of changes I made: I whizzed the lemon zest in my mini-food-processor with a little of the sugar so it was really finely ground, and stirred it in after the curd was cooked and strained. I also stirred in about 1 teaspoon of home-made limoncello (my last batch). My last few attempts at lemon curd have been good, but a little runny. This time I just kept cooking and stirring, cooking and stirring, until it got very thick indeed. It still wasn't up to Rose's recommended temperature of 196 degrees -- I've never had the nerve to take it that far. I think it was up to about 185 degrees. Divide, add more sugar to one batch, chill overnight. Phew!

OK, now for the half-recipe of Light Italian Meringue (p. 298-299). I was very diligent about measuring and weighing, getting everything ready, and letting the egg whites come to room temperature. Warm sugar syrup, beat egg whites, boil syrup to 248-250 degrees, immediately plunge my small syrup-pan into some water to stop the cooking -- all good. Slowly beat hot syrup into egg whites -- not so good. You see, I have a hand-held mixer and a round-bottomed copper bowl. The bowl spins around and moves on the counter top. I slowly poured the syrup onto the egg whites at the edges of the bowl, but wasn't able to move the whisk beater to the edge to incorporate it quickly enough. As soon as I realized this, I stopped the mixer, put down the syrup and held the bowl so I could incorporate the syrup. (This is one of those moments when you wish you were once of those multi-armed Hindu goddesses.) But some of the syrup ended up stuck to the sides of the bowl. Not to mention that the syrup remaining in my syrup-pan thickened and had to be reheated. What a pain. Well, the meringue did look very white and smooth, and I continued whipping it until cool -- it looked a bit like marshmallow fluff. But as soon as I started beating in the lemon curd, the meringue deflated drastically. Drat!

I tried letting the mixture cool enough that the gelatin started to set, and whipping again, but it didn't want to whip up. It tasted wonderful, but there wasn't enough volume to fill my Charlotte shell, not by a long shot. So, I whipped up 1/2 cup of heavy cream (stabilized with about 1/4 teaspoon of gelatin, see Rose's Super-Stabilized Whipped Cream, p. 256) and folded that in. Problem solved.

One of these days I am going to master Italian meringue, darn it all! Next time, I will rig up some sort of arrangement to hold the round copper bowl steady as I pour in the syrup (I'm thinking of a flatter bowl, lined with a terry towel).

After chilling the filling for about 2 hours, I pulled out the refrigerated lemon curd reserved for the topping. It was too thick to spread, but some careful microwaving and stirring thinned it down a bit. (You want it thick but pourable.) Then, back into the fridge for the final chill. The charlotte looked a bit naked, and the filling didn't come all the way up to the top -- so on went some whipped cream. I didn't bother trying to do a really neat piping job, but even a sloppy job makes it look much nicer! 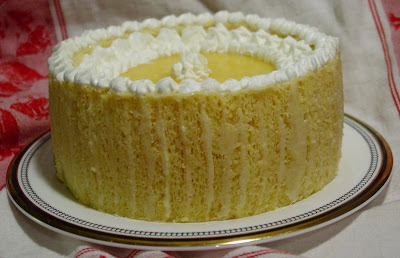 Yum! As you can see, we got impatient to eat dessert and didn't let it chill long enough to set the lemon curd. I kind of like the lemon waterfall effect... 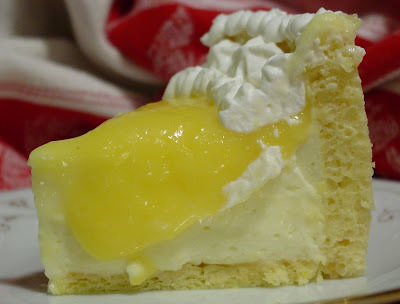 This is a lovely and tasty dessert, but it's very time-consuming, what with preparing and assembling all the different components. I'm not likely to do it again for "everyday" but I definitely would consider a full-size version for a special occasion! And this time was a great learning experience.
Posted by Bungalow Barbara at 6:37 PM

What a beautiful dessert. It's so elegant and pretty, you can tell that a lot of work and love went into making it.

I'm impressed! WOW! You totaly outdid yourself... Charlotte's are far from being the easiest desserts to make! WONDERFUL, Barbara!

Oh, this is so wonderful...lemon is my favorite of all the flavors of anything. This is absolutely outstanding and gorgeous. You are a rock star with this one!

Beautiful, Barbara! I loved following your process, and it's great that you used the Lemon Illusion, a wonderful filling.

What a beautiful Charlotte!
Lemon is one of my favorite.
I keep telling myself that I should buy this book. Now, I have a good reason to buy it...

I really admire your skill AND patience in making this dessert! And thank you for showing the stages in its making, I have never attempted anything like this and funnily enough, I don't think I ever will!
Jeannette

Amazing! I'm exhausted just reading about what you went through to create this lovely dessert. You have my admiration. Well done!