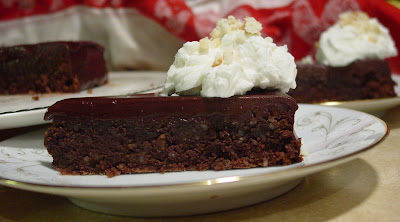 This recipe calls for Amaretti, which are Italian macaroon cookies made with almonds, egg whites, and sugar. (My husband keeps confusing them with Amaretto, the Italian almond liqueur. No, sweetie, not quite the same thing.) I'm sure I could have found them somewhere in Madison, but in the interest of using up extra egg whites, I made my own instead. Of course, that raises the question of how many to use. Many thanks to Amanda, who had already contacted Dorie Greenspan with the same question, and to Marthe who posted the answer on the "P&Q" (Problems and Questions). (You need 2.75 ounces, which turned out to be exactly 8 of my cookies.)

I used whole blanched almonds and a mixture of 77% Chocolove and 54% Callebaut chocolates for the cake, adding a pinch of salt. It was a little hard to be sure when the cake was done -- the knife kept coming out "goopy" rather than the "streaky" that Dorie says it should be. After several rounds of "just one more minute," I took it out, because with chocolate cakes it's always better to err on the side of underbaked. It turned out just right! Look at the lovely moist crumb in the picture above!

For the ganache glaze, I used a 3.5 ounce bar of Valrhona Noir Amer (71%) eked out with some more Callebaut 54%. It took two "pourings" to cover the cake. I scraped up the drippings from the first pour and put them through a small coarse sieve to remove any crumbs. Doesn't the surface look lovely and mirror-like? (There were a few small bubbles, but I popped them with the tip of a toothpick while the glaze was still runny.) 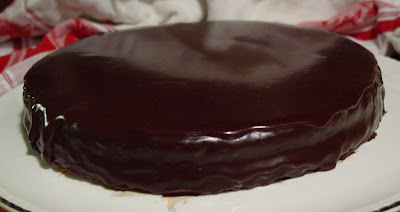 The bottom line? It was delicious!
Posted by Bungalow Barbara at 7:14 PM

Glad this turned out so good at your house! :) We liked it too!

Oh yummy. I wanted to use Vahlrona in mine, but *gasp* Whole Foods didn't have any. I was shocked. So I went with Ghirardelli bitter-sweet and it turned out pretty darned good anyway. :)

I always have those 'just one more minute' moments!

We really loved this torte. Yours looks so rich and chocolatey! YUM

It looks gorgeous! Your glaze turned out perfect.

Wow, your glaze is so beautiful!! Mine was a bit grainy. Glad you liked it!

Yours turned out beautifully! I love how your glaze shines!

You have an awesome looking tasty there. You really did get a nice glaze. I scraped up the leftover chocolate and used it as plate garnishing later. I mean I used what I did not eat for garnish later. Your chocolate choices are wonderful. The chocolate really does make all the difference.

Good for you to make your own cookies. Cake looks lovely.

Nice and shiny glaze - it looks fantastic. Glad you enjoyed it!

Your torte looks lovely. I like the thick layer of glaze on top.

Your torte looks gorgeous Barbara - a wonderful job. Double points for making your own amaretti - I would never have got there if i had to do that as well. (I ended up making an angel food cake that I threw out with my whites.)

Beautiful torte Barbara!!! Nice job on making your own cookies.

Absolute perfection, Barbara! So shiny too. As I am eating low fat cottage cheese I am so coveting your torte which is long gone. Among the most beautiful in blog land.
AmyRuth

Absolutely wonderful texture on that cake...and again, that whipped cream looks so elegant perched up there. I am in awe that you made your cookies! Wow.