Welcome to another chocolate-y week with "Tuesdays with Dorie!" This weeks recipe is "Four-Star Chocolate Bread Pudding" chosen by Lauren of Upper East Side Chronicle. Thank you, Lauren! Bread pudding is a new experience for me. 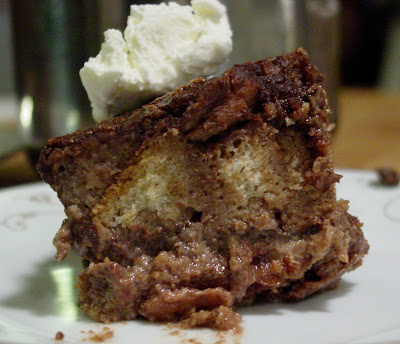 I wasn't sure if we'd like this dessert, so I made just a quarter of the recipe and baked it in a small casserole dish. How do you measure 3/4 of an egg? I used my scale. 1 large egg (out of the shell) should weight 50 grams, so 3/4 of that is 37.5 grams. I weighed the single egg yolk, too, because I've been hearing that egg yolks are getting smaller. No kidding! Granted, it came from a medium rather than large egg, but my wimpy yolk measured just 13 grams instead of the 18.6 grams that Rose Levy Beranbaum specifies for a large egg yolk. I decided to make up the difference with some of the extra whole egg. It seemed to work OK.

I couldn't get all of the chocolate to melt into the custard. There were tiny specks of chocolate in my custard even after I put it back over the heat and whisked like crazy. I have no idea why that happened. Eventually I just gave up and poured it over the bread. If I try this again, I'm going to melt the chocolate before mixing it into the custard mixture.

Speaking of the bread, I made my own! There isn't much of a selection of white bread at our food co-op, and Jim would give me all sorts of trouble if I brought home a loaf of supermarket white bread (gasp! the horror!) After browsing through some recipes, I decided against a brioche or challah. They sounded like a lot of work and contained a whole lot of eggs. I settled on a sandwich loaf recipe that had milk, one egg, 2 tablespoons of butter, and two tablespoons of sugar in one loaf. And to make it a bit healthier, one-third of the flour was white whole wheat flour. Jim still said it was "way too white-bread," and I thought it was a bit too sweet, but it worked just great for the pudding!

At first I thought I was going to have too much custard, and planned to baked the extra in a small custard cup. But the bread puffed up like crazy after soaking and I ended up needing all of the custard just to cover it. Oh yes, I put in some dried cherries, and sprinkled some Amaretti crumbs over the top just before baking. 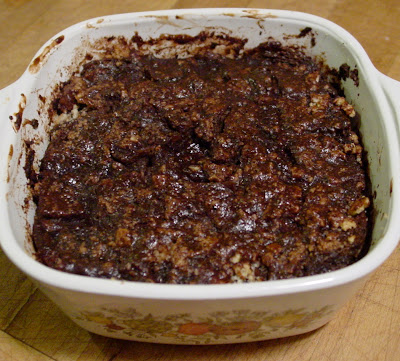 Here it is afer baking and cooling. It took about 35-40 minutes to bake, even though I was only making a quarter of the recipe.

Here's what the inside looks like. The chocolate didn't soak all the way into the bread. And the cherries all sank to the bottom even though I had quite deliberately put them in the middle of the two layers of bread cubes. Not really the most elegant of desserts -- but then, it's not supposed to be.

The verdict? It tasted fine, but I doubt I'll make it again. To quote Jim again, "I can think of lots of better ways to use chocolate." (Like last week's cake, for example.) Still, it was fun to try -- I've never made bread pudding before. I might do another one someday, but probably not with chocolate. In fact, I'm thinking maybe a savory one would be good -- with some shaved ham, onions, cheese, and some sort of vegetable -- sort of a quiche without the crust.
Posted by Bungalow Barbara at 1:59 PM

You gave it a good try! I am sure it tasted great. I mean anything with chocolate can never be bad!

Well, it sure looks delicious. It isn't my most favorite way to use chocolate either but it was a good thing to try.

Savory bread puddings are one of my favorites. Good idea; you will not be disappointed.

Glad you gave it a shot. I was feeling the same way before I made it but I ended up really enjoying it! Sorry it wasn't your favorite.

Glad you tried even though it wasn't a hit. :)

It definitely looks wonderful! I cheated and used one egg for 1/7th of the recipe. Oh, and my chocolate never melted either.

It looks like it turned out great and I bet the amaretti crumbs were a good addition. I love Jim's quote!

Boy! The trouble you went through to make only a quarter! WOW!

At least it came out nice!

Jim is right though, many more better ways to use chocolate LOL! But evetually you should try a classic, without chocolate, more raisins and cinnamon!

Your pudding looks really good. I agree with you that it was kind of one note and needed a flavour boost. I've seen people recommend bourbon sauce or even just cinnamon. Good try!

I would have never thought to break up amaretti cookies! I would love the added crunch! I agree with you on the bread pudding...not bad but just not my thing. ;)

Oh, yes, I think your ham version of the bread pudding is something we could really get into around here! The thought of wet chocolate bread just turned the guys off...and believe me, they will usually eat anything with chocolate! Your photos are lovely, and the one with the whipped cream looks very elegant!

Wow, making your own bread! Double points for that. Sorry it didn't knock your socks off, but I agree you should try a different recipe, because the taste and textures can be wildly different. The savory version sounds good!

I hope you'll write about the savory bread pudding if you try it...your idea sounds delish!