Still catching up -- here's the "Chocolate Tweed Angel Food Cake" for the Heavenly Cake Bakers group. We normally don't post the recipes for this group, but you can find this one on the National Public Radio Web site. However, the NPR recipe doesn't give the weights for the ingredients (one of my favorite part of Rose's recipes) and it doesn't give the recipe for the frosting. For those, you'll have to consult pages 158-162 of Rose Levy Beranbaum's "Rose's Heavenly Cakes." 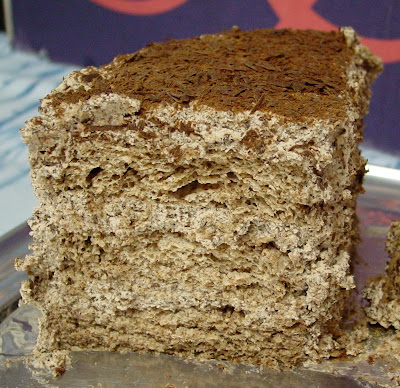 The whipped cream frosting is supposed to have almonds in it, but I left those out. I also stabilized it using 1/2 teaspoon of gelatin per cup of cream. And I must have really slathered it on, because I ending up needing to make 1 1/2 times the recipe.

I'm not a big fan of angel food cakes. Too sweet, too bland. But I loved this one. The chocolate adds flavor and cuts the sweetness. Most of the other folks who tasted it agreed. (Jim said it was just so-so -- but then he is even less of an angel food cake fan than I am.)

This isn't the first time I have baked this cake. I made it back in June of 2009, even before Rose's book came out. I didn't know that this particular cake would be in the book, but Rose had reveals there would be some sort of angel cake using Wondra flour. So I decided to use Wondra flour in her "Freckled Angel" cake from her book "Rose's Celebrations." Lo and behold -- this cake got a new frosting and a new name in the new book!

I did have the same problem both times I made this cake -- the top never rose really high, and it never cracked. Also, the cake pulled away from the sides of the pan a lot. At least it did not fall out of the pan when I turned it upside down to cool!

The other problem was that both times, after I removed the cake from the pan, it was really, really moist. In fact, the second cake was positively WET in the area that had been at the bottom of the pan while baking. I had to let it sit out for hours so the moisture could evaporate. The cake crumb itself was not "mushy" or underdone, though. It seemed "set" and springy. It was more as if excess water had oozed out of the cake as the crumb set, and been trapped. Very strange. But once the cake had dried out on the counter, it was fine.

Here are my pictures of that first baking: 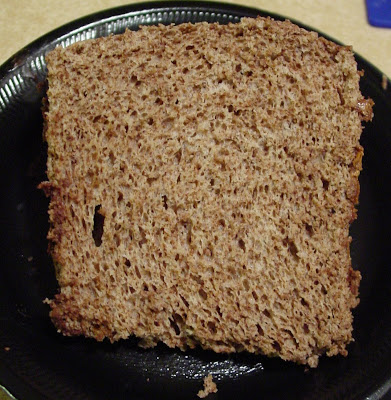 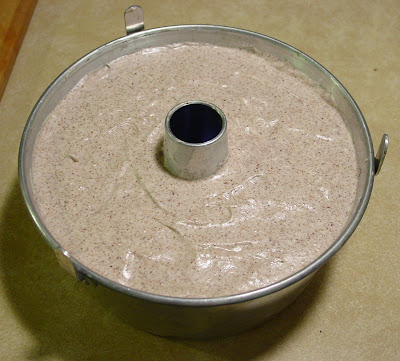 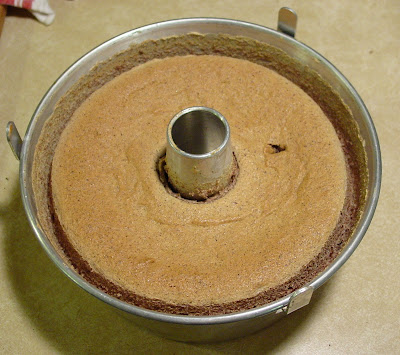 Posted by Bungalow Barbara at 11:51 PM

May l come over to your house for a peice of cake? That looks sooo spongy a soft and everything that is just wonderful...l am a cake...all round sweet lover...Boy! Congrads for the amazing cake ...

Yep, that's just how mine looked when I took it out of the oven, only mine fell out of the pan shortly after inverting it to cool. It tasted okay, but looked horrendous.

Out of curiosity, what type of chocolate did you use in the actual batter? I really liked this one too!

Matthew, I used Scharffen Berger unsweetened chocolate in the batter. I like dark chocolate so didn't mind the slight bitterness. Apparently the folks at work didn't mind either -- they disappeared fast, both times!

I really like the shaved chocolate on top. It looks delicious!

That looks great, Barbara. Glad you liked this one. I have yet to try this one.

This was an excellent cake, glad yours didn't fall out! I love the shaved chocolate on top.

Mine had that wet bottom too, and the interior texture was fine. Guess it is just a characteristic of the cake...

It looks fantastic! I don't have an angel food cake pan, but that makes me want to go buy one.