Ta-da! Here's a True Tangelo Genoise, the Heavenly Cake Bakers' assignment for February 8, 2010. Well, we were supposed to make a True Orange Genoise with Seville oranges, but I couldn't find any. So I went with some lovely organic Minneola tangelos instead. 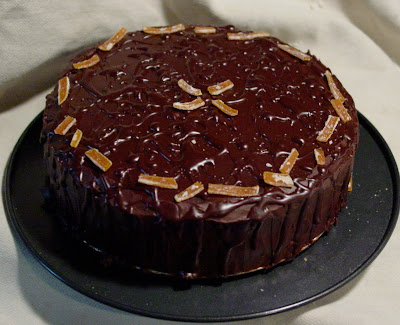 This is a half-size recipe (6 inches). Since I'm terrible at decorating cakes to look smooth and regular, I was happy that this one called for random drizzles. Random I can do. Looks good, doesn't it? 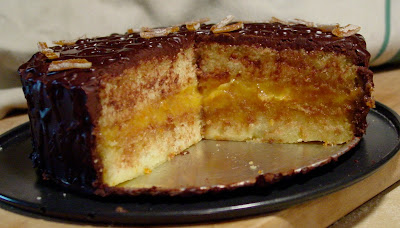 Here's a glimpse of the inside (sorry about the smears of chocolate on the cake). Two layers of French sponge cake (genoise) with a thick layer of tangy tangelo curd inside. It was Rose's books that convinced me to try citrus curds, and I've been hooked ever since. You can find the recipe on her blog. I started with 12 tablespoons of tangelo juice and 1 tablespoon of lemon juice, and reduced it down to 6 1/2 tablespoons, somewhat like the directions for juice oranges at the bottom of the recipe. I used tangelo zest and the amount of sugar she specifies for juice oranges. And I made a whole recipe, even though my small cake would only use half of it. Leftover curd is never a problem -- it's great on toast, and it freezes well too.

The genoise layers look nice, don't they? Well...that's the part I was able to save. I've only made genoise twice and it's been a failure both times. Sigh. Here's the whole sad story.

I decided to make two half-size (6-inch) genoise so I could use freeze the other layer and use it later. After consulting Rose's information plus Shirley Corriher's "Bakewise," (which has 8 pages of information on making genoise) I carefully weighed out my eggs (yolks and whites separately, since many eggs seem to have puny little yolks these days). I whisked and heated them with the sugar (Shirley says to heat them to 86-90 F, and no hotter than 110 F.). Then I beat them with my hand-held power mixer -- Shirley says the optimum beating temperature is 75-80 F. Mine got cool after a while, so I re-warmed them briefly over the pan of hot water as needed. She says you should not beat too long on high speed or the foam will fall when cooked, so I beat for 2 minutes on high and then 10 minutes on medium as she recommended. The egg foam looked lovely, smooth, thick and glossy. Then I folded in my cake flour / cornstarch mixture. It went in nicely and the eggs did not deflate. Everything was looking great!

Then I took some of the egg mixture and mixed it in with the melted browned butter / vanilla mixture. (Rose says to remove this egg mixture before folding in the flour, but Shirley says to do it after. I guess it must work either way.) I think this is where the problem began -- I didn't mix the butter in completely. So when I folded this butter mixture back into the egg/flour mixture, the whole thing deflated badly, even though I used my very best folding technique that had worked so well with the flour.

Well, onwards...I divided the batter up between the two prepared 6-inch pans. As I smoothed the top, a lot of large bubbles formed and popped. But, the batter did fill the pans about half-way. Into the oven to see what happened...

They certainly did not turn out 2 inches high. More like 1 1/4 inches. But the worst surprise was when I turned them over and took off the parchment liners. At the bottom, there was a heavy, dense layer that almost reminded me of the rind on a cheese. 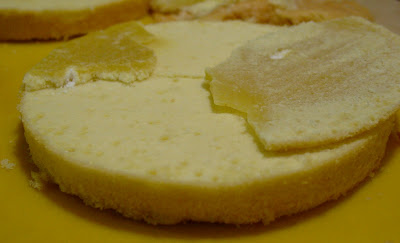 See it in that picture above? Yuck! I tried a tiny bite of the "rind," and it was tough and awful. So, I just cut it all off. My theory is that the butter came out of emulsion, dropped to the bottom of the cake, and formed a thick gooey layer that then baked hard.

At this point I was left with two somewhat denser genoise layers about 1 inch tall. OK, let's just make the cake with those! I figured I had about 3/4 of the genoise left, so I made up 3/4 of the syrup recipe (sugar, tangelo juice, Grand Marnier) and used it to soak the cake. I layered with the tangelo curd, made up all of the ganache glaze recipe (because extra ganache is never bad, especially when it has Grand Marnier in it too), and went ahead with the recipe. The decorations are home-made candied tangelo peel.

Despite the genoise disaster, this was very tasty. As someone else said, this is a "grown-up" cake, with the bitter/sour notes of the chocolate and orange. And it's very elegant. It was a lot of work, though. All those different components, and then putting them together, and waiting for it to mature...

I'm still determined to master genoise! I think I may try Shirley's recipe -- it is very similar to Rose's except that Shirley adds extra egg yolks. Egg yolks contain natural emulsifiers -- maybe that would help the butter to mix in better. Just you wait, genoise, I'll get you yet!
Posted by Bungalow Barbara at 1:00 PM

Barbara, I often got that rubbery layer. That's why I always check now, after almost serving my "chocolate rubber cake." I hate when that happens. Beth

Thanks for the tip to look at Cookwise for technique on the génoise--I'm also having problems with it, and perhaps another set of instructions will help. Shirley's write-ups are usually great.

Tangelos! What a great idea.

I would be curious to know your take on the dry chocolate cake issue.

Bummer that the genoise didn't turn out like you wanted, but the finished cake looks delicious! My cake came out quite dry, which might be the opposite problem of what happened with yours.

I almost bought tangelos too, when I couldn't find any sevilles, but then I found some blood oranges instead. It's nice to know those would work too. Your cake looks great! :)

Your decorated cake looks great despite your interferences.

great writeup! And i think your cake looks yummy and so mouthwatering!

Your cake looks amazing. I will be reading with anticipation as you crack the genoise mystery.