This week's recipe for "Tuesdays with Dorie" was a Banana Cream Pie, chosen by Amy of Sing For Your Supper. You can find the recipe on her blog. 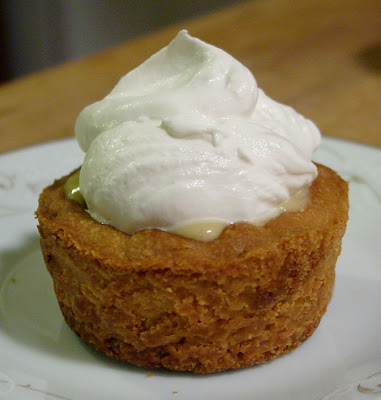 As you can see, mine were more like pie- or tart-lets. I made half a recipe of Dorie's Sweet Tart Dough and pressed it into some standard-size muffin tins. I ended up with enough for three cups plus a little left over (it got baked and eaten as a cookie-delicious!)

But after they were frozen and baked, the dough puffed up a lot. Hardly any room for the filling! Live and learn. Notes for next time: try dividing the tart dough into 4 pieces (for a half-recipe), rolling each one out, trimming to size and then placing in muffin tins. Also, try a trick I just read about in Shirley Corriher's "Bakewise" -- sandwich the dough between two pans and bake it upside down until firm -- then turn right-side up, remove the top pan and finish baking.

Oh well, onwards...I made one-third of the recipe for the pastry cream filling. One change--I used potato starch instead of cornstarch, just because I like it for pie fillings and was curious to see how it worked for pastry cream. The cream thickened up really fast! But a lot of other folks said that, too, so I don't think it was the potato starch. I turned down the heat and whisked it for a bit longer (with difficulty), as I was worried about cooking the eggs enough to kill bacteria. Turns out this was a good thing, although not for that reason. In "Bakewise," it says that you need to heat a starch-thickened custard to 180 F to deactivate an enzyme in the egg yolks. Otherwise your custard (or pastry cream) will thin out and get soupy after standing.

The pastry cream seemed so thick that I whisked in a little cream. It was stored in the fridge for a couple of days. It did seem a bit thin when I took it out. Once again, live and learn.

With those thick tart shells, there was only room for about three slices of banana and a few spoonfuls of pastry cream. Lots of room for the whipped cream on top, though!

The verdict? Well, the ratio of crust to filling was way off, of course. I ended up spooning on more filling on the side. The crust was wonderfully crisp, tender, and buttery. The brown-sugar-and-cinnamon pastry cream was the best part of the whole thing -- I wanted to take a bath in it! Luscious! The touch of tartness from the sour cream in the whipped cream rounded the tastes off nicely.

My husband, on the other hand, said it was "boring" and wanted to know when we were going to have something chocolate. Guess what, honey, you're in luck for the next three weeks at least! 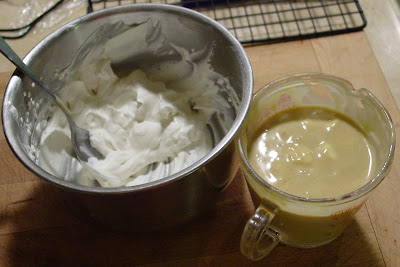 Conclusions:
1) I really, really loved the pastry cream. I'd like to use it for a Tropical Cream Pie or Trifle involving bananas, pineapple, coconut and rum....mmmmm.
2) I'm going to have to give the library's copy of "Bakewise" back soon, so my very own copy will soon be on its way -- along with "Angel: After the Fall, Volume 3." Yes, I have eclectic tastes.
Posted by Bungalow Barbara at 8:57 PM

Oh those are so cute. I can see how the crust might have been a bit much ... but they look great. And you can always eat filling by the spoonful, right? :)

Your crust looks fabulous--I remember the wonderful browned butter taste of the sweet tart dough from other recipes. Bakewise is definitely worth owning--I bought it right after it came out. I read it cover to cover, but then got distracted and haven't really baked from it yet.

cute little tartlettes! :) Your hubby is definitely in for some chocolate the next 3 weeks!

I like the minis, and I guess it was a good thing you only made half a batch since your husband declared them boring. I've had my eye on Bakewise for a while; nice to hear that it is worth buying.

Ciao ! I love the look of your small ones. I liked the custard a lot too !

I love this pie and was browsing the other TWD posts and not many girls have made them small. They look so beautiful. I definitely prefer small.

They look great! I love the filling dripping from the sides. That makes it look abundant!

Your minis are very cute. I made minis too and they were a little off on the ratio so I spooned extra on the side. Worked perfect.

Your minis are adorable! The pastry cream was really delicious this week, wasn't it? :)

Three slices of banana is all one needs to be happy... LOL

Your tartlets are adorable. I really loved the taste of this crust.

Well, they certainly look cute and I think they look very tasty! It is such fun to come over here and learn what you learn...very nice of you to share all that!